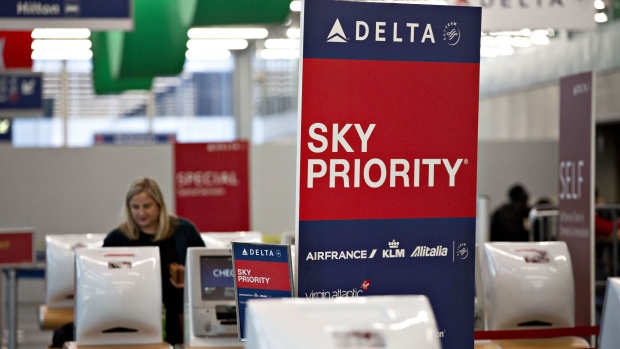 Delta Air Lines Inc. is cutting flights further, slashing spending and seeking government aid to contend with the coronavirus outbreak -- and Chief Executive Officer Ed Bastian warned employees that the situation is likely to get worse.

The carrier is “optimistic” about U.S. support after discussions with the White House and Congress, Bastian said Friday in an internal memo. Delta will park as many as 300 planes and cut its seating capacity by 40 per cent in the next few months as demand evaporates. That’s the biggest reduction in company history, including after the 9/11 terrorist attacks, he said.

“The speed of the demand falloff is unlike anything we’ve seen,” said the CEO, who will give up his salary for the next six months. “We are moving quickly to preserve cash and protect our company. And with revenues dropping, we must be focused on taking costs out of our business.”

Delta’s rush to reduce expenses underscores the swift collapse in travel demand as the coronavirus spreads worldwide. Cancellations are rising so fast that more customers are scrapping reservations than making new ones for travel over the next month, Bastian said.

The precarious situation facing U.S. carriers is focusing attention on Washington, where Treasury Secretary Steven Mnuchin said the airlines were likely to need assistance because of their “short-term liquidity issue.” American Airlines Group Inc. said it was involved in discussions about government support as well.

Senator Ted Cruz, the Texas Republican who chairs the Senate Commerce Committee’s aviation panel, is working with airlines, Trump administration officials and other lawmakers on economic relief measures, according to his office.

Airlines are “on the front lines of combating this public health crisis and are facing very real economic challenges as a result,” Cruz spokeswoman Jessica Skaggs said in a statement.

“I’m optimistic we will receive their support,” Bastian said. “That said, the form and value is unpredictable, and we can’t put our company’s future at risk waiting on aid from our government.”

As part of the cost cuts, Delta will defer new aircraft deliveries and pare investment by at least US$2 billion this year. The Atlanta-based company is also adopting a hiring freeze and offering employees voluntary unpaid leave.

The airline industry took an additional blow this week when President Donald Trump ordered temporary restrictions on travel to the U.S. from the European Union. Bastian warned that the 30-day ban on most flights “could be extended,” furthering the drop in traffic.

“Demand for travel is declining at an accelerated pace daily, driving an unprecedented revenue impact,” said Bastian. “We’ll be making more critical decisions on our response in days to come. The situation is fluid and likely to be getting worse.”