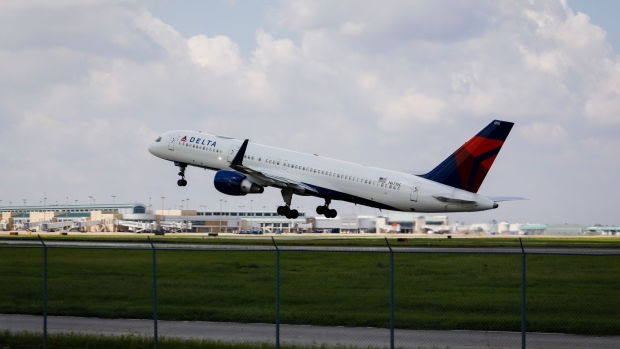 A passenger aircraft operated by Delta Airlines takes off at Louis Armstrong International Airport after Hurricane Ida in New Orleans, Louisiana, U.S., on Friday, Sept. 3, 2021. A second critical transmission line that delivers power to New Orleans is up and running again and flights are slowing resuming at the city's airport Thursday. , Bloomberg

(Bloomberg) -- Delta Air Lines Inc. is cutting flights just ahead of the busy Memorial Day weekend and through the summer to help it recover faster from bad weather, higher-than-expected worker absences and other issues that have rattled recent operations.

The airline said it will trim about 100 flights a day in the US and Latin America from July 1 through Aug. 7 to help bolster reliability for remaining flights. Delta said additional adjustments could be made, hinting at possible further reductions. The nearer-term cancellations for the upcoming holiday weekend, initially disclosed in a memo sent to employees late Wednesday, are designed “to relieve pressure by pro-actively thinning the schedule over Memorial Day and through the balance of June.”

Delta has prided itself on its relatively low cancellation and flight-delay rate compared with other carriers but the last-minute decision to slash its schedule shows how precarious the ability to staff flights has become. Nearly all US carriers cut initial second-quarter capacity, with some trimming into the third quarter, as they struggled to balance surging demand with a pilot shortage.

Weather, vendor staffing and air traffic control issues, along with higher-than-expected absences among some airline work groups, are affecting Delta’s operations “more than any time in our history,” said the memo from Chief of Operations John Laughter and Allison Ausband, chief customer experience officer.

Packed planes over the summer could make it difficult for airlines to move thousands of stranded passengers to other flights. It could take several days for some travelers affected by the latest Delta cuts to reach their destination, Robert Mann, president of consultant R.W. Mann & Co., said in an interview.

“It’s consistent with what we’ve seen by others in the industry, it’s just late in the game,” Mann said. “It’s really late in the game if you’re flying over the Memorial Day weekend. It’s embarrassingly late for that.”

Delta’s latest reductions account for about 2% of its scheduled flights during the July through early August period. It will follow a planned cut in second-quarter capacity by 16% from 2019 levels. United Airlines Inc. expects a 13% decline while American Airlines Group Inc. will be down as much as 8%.

Delta declined to update its full second-quarter capacity plans. The airline is canceling flights over the holiday weekend at least 24 hours ahead of time, with 60 flights affected Thursday and 40 so far for Friday, a spokesman said.

The prospect of being stranded in a distant airport may deter some would-be travelers from booking a summer getaway far from home.

“There’s no way to sugar coat the re-accomodation challenge,” said Samuel Engel, senior vice president of the aviation group at consultant ICF. “It’s not just that the Delta system is at high load factors. It’s that the remaining opens seats are on the wrong flights, such as flights home from the beach Friday night. Some Delta passengers should be thinking about firing up the barbecue at home instead.”

(Updates with details from memo in fourth paragraph.)