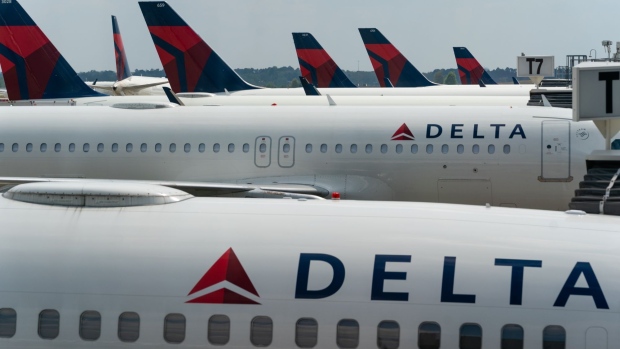 (Bloomberg) -- Delta Air Lines Inc. pilots would receive at least 34% in cumulative pay hikes over the four-year term of an agreement in principle reached with the carrier.

The tentative accord -- with $7.8 billion in total increased value -- would also provide a one-time payment to pilots, the Air Line Pilots Association told members in an email Friday. The agreement, reached after more than three years of talks, must be approved by union leadership before going to pilots for a vote.

If approved, terms of the agreement are expected to set minimum standards for contracts being negotiated with pilots at American Airlines Group Inc., United Airlines Holdings Inc. and Southwest Airlines Co. Talks across the industry have been particularly tense as unions seek increases in compensation and more flexible work schedules, and pilots have frequently picketed outside of airports and sites of company investor meetings.

The agreement “recognizes the contributions of our pilots to Delta’s success,” the airline said in an email.

It provides for an 18% pay increase effective when the final contract is signed, followed by a 5% hike after one year and then 4% after each of the next two years. The agreement also includes a provision to ensure Delta pay exceeds that in any contract for American or United pilots by at least 1% for its term.

The accord could be the first new pilots contract approved at major US airline since before the start of the pandemic. Pay raises could exceed the 31% total because of specific increases designed to align rates for pilots flying some Airbus SE and Boeing Co. aircraft, the union said. More than 25% of the agreement’s value comes from “quality-of-life” changes like work scheduling improvements.

Leaders of American’s union last month rejected a proposed contract that would have raised pay 19% over two years and United pilots overwhelmingly voted down a new labor agreement, saying it fell short of the “industry-leading contract” they deserved.

“Without question bargaining progress by one airline will stimulate other ongoing labor negotiations in our industry,” leaders of the Allied Pilots Association at American told pilots in a message Saturday. “This development represents a significant event in our own” negotiations.

Labor costs vie with fuel as airlines’ two largest expenses, and most US carriers are already facing higher operating costs coming out of the pandemic. Pilots want to be compensated for working through the pandemic and flying record amounts of overtime when demand returned at a surprisingly rapid pace.

Delta’s existing pilot contract took effect in 2016 and became eligible for updates at the end of 2019. Airline labor agreements don’t expire, but become amendable at the end of specified terms. Talks were suspended during the pandemic, and a member of the National Mediation Board joined talks in January to help reach an agreement.