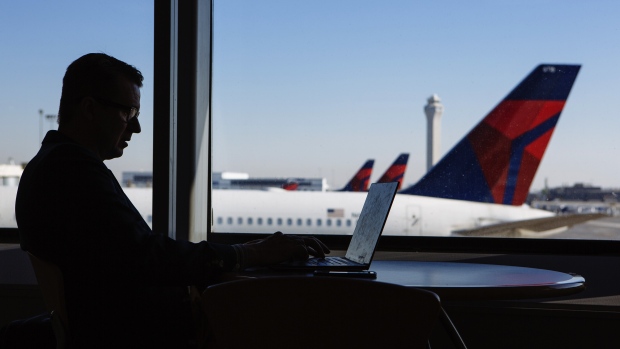 DALLAS -- A new credit card deal and rising corporate travel boosted profits for Delta Air Lines in the first quarter, a trend it predicts will continue this spring.

Delta executives said Wednesday that corporate-account revenue is up 10 per cent from this time last year, helping offset choppy demand from vacation travellers.

That was one of several factors that pushed Delta's first-quarter profit up by 31 per cent, to US$730 million.

Atlanta-based Delta has been leading its closest U.S. rivals -- American Airlines and United Airlines -- in financial measurements such as profit margin and operational ones like on-time flights and fewer cancellations. Delta executives say it helps them win corporate travellers.

On top of that, Delta cut a revamped credit card deal with American Express that Delta says will produce US$500 million in additional revenue this year and even more in the future. AmEx will pay Delta up to US$7 billion a year by 2023, compared with US$3.4 billion last year -- a better deal for the airline than analysts were expecting.

Delta gets an increasing share of revenue, now 55 per cent, from premium fares and non-ticket sources such as the credit card deal and a growing aircraft-maintenance operation, which might partly insulate it from an economic slowdown.

Additionally, American, United and Southwest Airlines will cancel thousands of flights through early summer because regulators grounded their Boeing 737 Max planes after deadly crashes in Indonesia and Ethiopia. Delta doesn't own any Max jets and hasn't ordered any. Its shares have gained more than the others since the second crash last month.

Those cancelled flights will cut into revenue at airlines that have the Max and will inconvenience passengers, but analysts think that by reducing flights they could unintentionally push fares higher.

Investors worry that airlines are adding too many seats and creating fare wars that hurt profits. Delta expects to increase passenger-carrying capacity by a relatively modest 4 per cent to 5 per cent in the second quarter, compared with a year ago.

Revenue rose 5 per cent to US$10.47 billion, beating the analysts' forecast of US$10.39 billion. Costs excluding fuel dipped, while fuel expense rose 7 per cent.

The airline forecast second-quarter earnings of US$2.05 to US$2.35 per share. The US$2.20 midpoint is better than the US$2.14 forecast of the Zacks analysts.

Delta Air Lines Inc. is the first U.S. carrier to report first-quarter results. Its shares rose 3.5 per cent shortly after trading opened. By midday they were up just 44 cents, less than 1 per cent, at US$57.39.