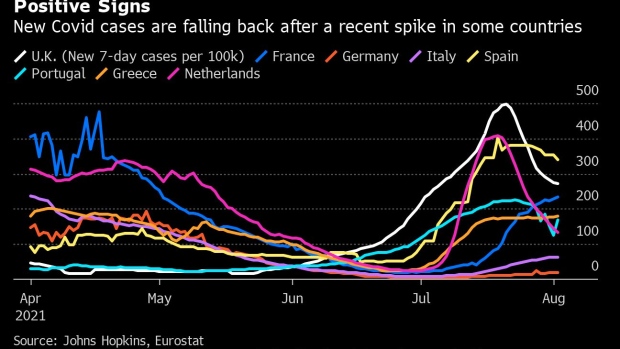 (Bloomberg) -- The spread of the delta coronavirus variant has pushed the threshold for herd immunity to well over 80% and potentially approaching 90%, according to an Infectious Diseases Society of America briefing.

Tyson Foods Inc., America’s biggest meat company, is requiring workers at U.S. offices to be fully inoculated by Nov. 1. New York City will require anyone dining indoors at restaurants or exercising at gyms to show proof of their inoculation.

U.S. President Joe Biden singled out Florida and Texas, where cases are surging, criticizing the pandemic response by the Republican governors in those states. The two states are responsible for about one-third of all new cases in the U.S. in the past week, the administration said Monday.

China is renewing restrictions and canceling flights amid a Covid-19 resurgence. Dozens of cities have advised residents to refrain from traveling unless it’s absolutely necessary, according to Chines media reports.

Most children who get Covid-19 recover within a week, according to a large U.K. study that may help soothe fears about whether kids who get sick will face the most protracted forms of the disease.

Some 4.4% of 1,734 children with symptomatic Covid in the study experienced symptoms for longer than four weeks, most often fatigue, headaches and loss of smell, researchers said in The Lancet Child and Adolescent Health.

The research team followed 250,000 children in the U.K., between five and 17 years old, between September of last year and Feb. 22.

The U.K. is set to approve Covid-19 vaccination shots for those at age 16 and 17, the Telegraph reports, citing a government source. The demographic group will be advised to get the Pfizer or Moderna vaccines, matching the guidance for other younger U.K. residents.

Idaho is suffering a surge in Covid-19 infections among babies and toddlers, prompting an urgent call for unvaccinated adults to get shots and “cocoon these kids.”

The current pace is 53 per 100,000 children from newborn to age 4, up from 16 per 100,000 two weeks ago, Kathryn Turner, deputy state epidemiologist at the Idaho Division of Public Health, said during an online briefing Tuesday. The most likely cause is circulation of the delta variant, Turner said.

The Centers for Disease Control and Prevention’s new moratorium would apply to counties with high rates of coronavirus infections, according to two people familiar with the matter. The move shows the extent to which the spread of the delta variant of coronavirus has upended the administration’s agenda.

The delta-fueled surge could mean strains for the largest diagnostics maker, as Quest Diagnostics indicated it’s looking at increasing capacity to an uptick in demand for tests.

“Our average positivity rate has also steadily increased over the past six weeks, making it more difficult to pool specimens,” a method of screening multiple samples at once as a way of turning test results around more quickly while using fewer resources, the company said in a statement Tuesday.

Quest said its tests can pick up infections with the delta variant as well as other strains and is still turning around most Covid-19 tests within a day. But the company is “currently evaluating measures to increase capacity should cases and positivity rates continue to surge.”

U.S. President Joe Biden singled out Florida and Texas, where cases are surging, criticizing the pandemic response by the Republican governors in those states. The two states are responsible for about one-third of all new cases in the U.S. in the past week, the administration said Monday.

“We need leadership from everyone,” Biden said at a briefing. “Some governors aren’t willing to do the right things to make this happen. I say to these governors, please, if you aren’t going to help, at least get out of the way for people who are doing the right thing.”

Vanguard Group Inc. is offering $1,000 to employees who get vaccinated by October, according to a person familiar with the matter.

The asset manager is extending the payments to all workers who can prove they’ve gotten a Covid-19 vaccine, even if they were inoculated before the firm extended the offer. A Vanguard spokeswoman confirmed the company is offering an incentive.

Brazilian states and cities are preparing to suspend most limitations on businesses and gatherings as Covid cases and deaths drop to the lowest in months while vaccinations pick up speed.

In Sao Paulo, many schools have reopened at full capacity for in-person classes this week, and the state will end restrictions on opening hours and capacity for most businesses starting Aug. 17. Rio de Janeiro also has plans to ease rules as of Sept. 2, including on the use of masks. The reopening will include a four-day celebration, Mayor Eduardo Paes said, adding that New Year’s festivities will be the largest in the city’s history.

Public schools in Denver will require indoor masks for students, teachers, staff and visitors when classes resume Aug. 9 “regardless of vaccination status,” Will Jones, a spokesman for the school system, said in an email. On Monday, the city announced all municipal workers, including teachers, must be vaccinated by the end of September.

The U.S. government is in “active” and “sensitive” discussions about investing in a comprehensive pandemic preparedness program, said Anthony Fauci, the nation’s top infectious-disease expert.

Speaking at a Tuesday event with the Center for Strategic & International Studies, a Washington-based think tank, Fauci said the U.S. is continuing to plan for the future, ever-focused on how vaccines, therapeutics and diagnostics might be used to combat future pandemics.

Florida Governor Ron DeSantis’s move to bar school mask mandates is already working even as the state reports a record number of people hospitalized with Covid-19.

Less than a week after the Republican governor threatened to withhold state funding to school districts that require masks, two schools are backing down on such mandates. Broward County Public Schools reversed its masking rule, which the school board mandated just a week prior, in an effort to comply with the governor’s executive order that schools should leave masking decisions to parents, according to a statement Monday.

Gadsden County School District had also planned a mask requirement for the coming year, but has reversed the order, according to WTVT in Florida.

The Russian Direct Investment Fund said it’s reached agreement to produce 3 million doses of the second shot of its Sputnik V vaccine in Argentina this month, after a presidential adviser in the Latin American country criticized delays in deliveries.

Laboratorios Richmond SA will start making Sputnik vaccines available in Argentina starting this week with an initial batch of 150,000 doses, Russia’s sovereign wealth fund, which is in charge of Sputnik’s international rollout, said by email on Tuesday.

The number of people hospitalized with Covid-19 in Florida climbed to a record 11,863, even as Governor Ron DeSantis reaffirmed his stance against against new public-health mandates.

Data from the Centers for Disease Control and Prevention -- which is available only through July 30 -- shows Florida’s emergency department visits with confirmed Covid continue to rise, but the pace of increases had begun to moderate.

New York City will require proof of vaccination for workers and customers at indoor restaurants and gyms, according to Bill Neidhardt, the mayor’s press secretary. Mayor Bill de Blasio will announce the mandate at his Tuesday virus briefing, Neidhardt said.

The move by de Blasio is the latest step to encourage New Yorkers to get vaccinated. City workers must get the Covid-19 shots or be tested weekly.

CureVac and Arcturus Therapeutics rose after Sanofi agreed to buy Translate Bio Inc. for $3.2 billion. Sanofi and Translate were partnered on Covid-19 vaccine development before the French drugmaker made a bid for the Massachusetts-based biotech.

Arcturus also said it got the go-ahead in Singapore to advance two mRNA candidates to a Phase 1/2 study.

Weekly cases in the Netherlands continue to fall with 21,005 infections reported on Tuesday, down from 37,343 in the previous week. The national health service said the country appears to have reached a peak in Covid-19 hospitalizations, with 541 new admissions reported in the past week, down by 23.

Scottish First Minister Nicola Sturgeon confirmed the country will lift most virus restrictions on Aug. 9, in line with the government’s plan and after a drop in infections.

Tyson Foods Inc. is requiring all of its U.S. workers to be fully vaccinated no later than Nov. 1. The move by Tyson, America’s biggest meat company, is among the most aggressive yet to prevent another wave of infections that shuttered food-production plants in 2020.

Tyson in a statement Tuesday said all company leadership must be vaccinated by Sept. 24, all in-office workers by Oct. 1 and all other employees by Nov. 1.

The Chinese-made Sinopharm vaccine has failed to produce sufficient antibodies in a quarter of elderly people who were voluntarily tested in Budapest, according to a study by the opposition-led Budapest City Hall.

The results were published just as Hungarian Prime Minister Viktor Orban’s government, which has faced opposition criticism for having widely given Sinopharm shots to older people, started offering third shots this week for anyone who requests them.

Hungary, which has had the highest level of Covid-19 deaths per capita after Peru, was the only European Union country to have deployed the Sinopharm vaccine.