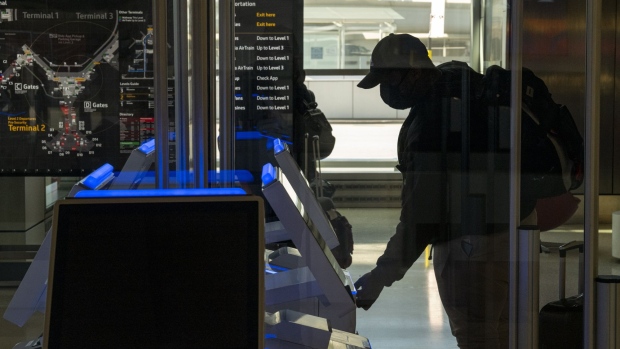 A traveler wearing a protective mask uses an automated kiosk to check-in at the Delta Air Lines Inc. check-in area at San Francisco International Airport (SFO) in San Francisco, California, U.S., on Monday, Dec. 21, 2020. Airline passenger numbers in the U.S. totaled 1.06 million on Dec. 20, compared with 2.52 million the same weekday a year earlier, according to the Transportation Security Administration. , Bloomberg

Delta Air Lines Inc. will return 400 pilots to full flying status by this summer, betting that the expansion of coronavirus vaccinations will trigger a rebound in travel demand.

The plan is “well ahead” of when the company originally estimated it would restore pilots to full active status, John Laughter, Delta senior vice president of operations, said in a Jan. 21 memo. The decision was based in part on available training capacity in March and April and facilitated by Delta’s US$2.9 billion share of a second round of federal payroll aid for U.S. carriers.

The improved outlook builds on Delta’s expectation that it will end daily cash losses in the second quarter, and potentially turn a profit in the third. The upbeat comments -- in contrast to a more dour outlook last week from United Airlines Holdings Inc. -- have spurred hopes that a recovery will begin after a tough first quarter in which Delta expects to burn as much as US$15 million a day.

“We’re cautiously optimistic that demand will increase as vaccinations roll out across the world, and we look forward to restoring all affected pilots back to full flying status as the recovery continues,” Laughter said.

Delta fell 2.8 per cent to US$38.88 at 11:58 a.m. in New York amid broad declines of transportation stocks spurred by worries over the short-term outlook.

Delta declined to comment about future flight capacity or schedule planning. The airline’s pilots in November approved an agreement that protected them from furloughs this year in exchange for cutting monthly flying an average of 2 per cent for each aviator. Delta had warned that 1,713 would be furloughed if a cost-cutting plan wasn’t in place.

“We are encouraged that Delta has begun recalling pilots that the pandemic has sidelined,” said Chris Riggins, spokesman for the Air Line Pilots Association’s unit at Delta. “ALPA has partnered with Delta numerous times over the past year, making mutually beneficial adjustments to our pilot working agreement to weather this pandemic’s extreme challenges. We look forward to continuing to do so as our airline recovers.”

PSA Airlines Inc., a regional affiliate of American Airlines Group Inc., plans to hire pilots for classes starting in February as it rebuilds a staff depleted by attrition during the pandemic, and is adding flight attendants after a nine-month pause.

With the second infusion of federal aid, American and United are recalling employees who had been laid off. Delta didn’t furlough any workers because enough of them either voluntarily left the company or took leave programs.

The Delta pilot decision was reported earlier by CNBC.