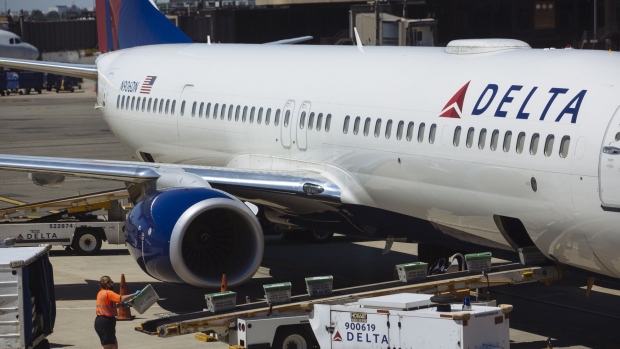 A worker loads postal packages onto a Delta Air lines Inc. airplane parked at a gate at Newark International Airport (EWR) in Newark, New Jersey, U.S., on Tuesday, June 9, 2020. Airline losses are surging to unprecedented levels expected to be more than three times those following the 2008 global economic slump, according to the industry's main trade group. Photographer: Angus Mordant/Bloomberg , Bloomberg

Americans will be able to fly into Italy without quarantine for the first time in months under a pilot program that will offer COVID-19 tests on flights from two U.S. airports to Rome.

Delta Air Lines Inc. will test passengers for COVID-19 on flights from Atlanta to Rome in the latest attempt by the airline industry to open up the lucrative market in trans-Atlantic travel. The flights, starting Dec. 19 under a new Italian policy, will be matched by Alitalia from New York’s JFK, Aeroporti di Roma said separately.

The program will start on Dec. 19, Delta said a statement Thursday. While Italy’s backing will help Americans travel to the European country, there will be a smaller impact on Italians, since they are still subject to a near-blanket ban on European travel to the U.S.

Italy, whose economy has been hit hard by the travel industry slump caused by the coronavirus pandemic, has been experimenting with COVID testing between its airports in Rome and Milan, as well as flights to Germany. Getting buy-in from the U.S. and other European countries will be a key in the airline industry’s push for pre-flight tests to replace the system of restrictions, including quarantines, that have effectively eliminated flights across the North Atlantic.

U.S. and European Union citizens arriving in Italy on the Delta and Alitalia flights will be exempted from Italy’s quarantine, according to the statements. Americans can still only travel to Italy for reasons including work, health and education, Delta said.

Italy currently imposes a 14-day quarantine on arriving travelers from the U.S. EU arrivals are broken into groups with varying restrictions based on infection levels in the country of departure.

Since March, the U.S. has suspended entry to most travelers from the EU, while American citizens are free to enter. Several domestic agencies have recommended the Trump administration lift the ban, people briefed on the discussions said Wednesday.

Alitalia has also trialed test-before-flight on its Rome-Milan route, while Lufthansa’s Austrian is taking similar steps between Vienna and Hamburg.

British Airways, a unit of IAG SA, and American Airlines Group Inc. have also started to connect London with Newark under a similar agreement. However, government approvals will be required for any of the programs to make a serious impact.

--With assistance from Anthony Palazzo.