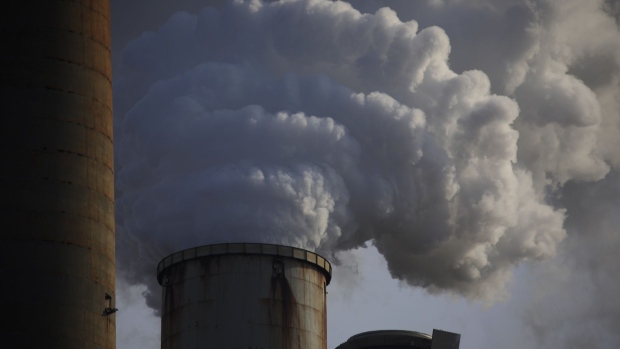 Emissions rise from the Kentucky Utilities Co. Ghent generating station in Ghent, Kentucky, U.S., on Tuesday, April 6, 2021. Coal's slow downfall is gaining momentum across the U.S. as clean energy becomes cheaper and wins widespread support, but lawmakers in mining states from Wyoming to West Virginia are determined to fight back with a series of roadblocks to President Joe Biden’s plan to cut greenhouse-gas emissions. Photographer: Luke Sharrett/Bloomberg , Bloomberg

(Bloomberg) -- Delta Corp Ltd. of Zimbabwe intends to slash emissions of greenhouse gases by 40% over the next eight years through measures such as climate-friendly refrigeration and asking suppliers to use energy-efficient manufacturing and transportation.

The goal is in line with the Zimbabwean government’s target, which requires most industries including energy, waste management, manufacturing and agriculture, to aim at avoiding a 40% increase in emissions.

Zimbabwe seeks to limit carbon dioxide output to 44.7 million tons by 2030 from 35.8 million tons in 2017. Without any action, emissions are seen climbing to 75.4 million tons, according to a government report.

Delta, in which AB InBev Zimbabwe Ltd. holds a 23.9% stake, has production and distribution processes that consume significant amounts of fossil fuels, according to Patricia Murambinda, general manager for corporate affairs.

Some of the initiatives planned include using light-weight packaging, natural lighting and energy management devices.

“There are ongoing collaborative efforts across the supply chain to implement projects that reduce CO2 emissions,” Murambinda said. “We have injected CO2-based HFC-free coolers to replace HFC refrigerants in our coolers, reducing global-warming potential and energy demand,” she said, referring to a gas whose global warming potential is thousands of times stronger than CO2.

Globally, a drop of HFCs could aid in avoiding about 0.4 degrees Celsius of temperature rises by the end of the century.