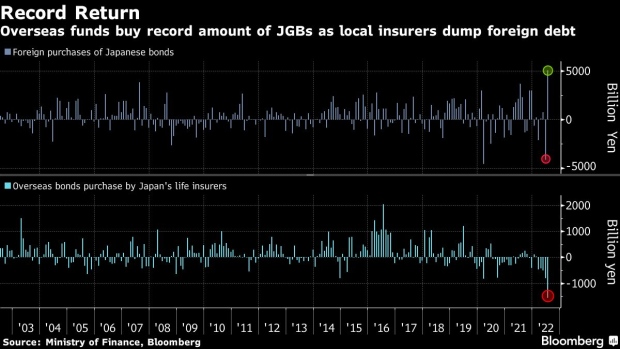 (Bloomberg) -- Bond vigilantes betting against Japanese sovereign debt may soon be tempted into a complete change of heart, given the size of the yields they now offer and the improving sentiment.

Dollar-based funds get a currency-hedged yield of 4.30% on Japan’s 10-year bonds this week, a healthy premium to the 2.80% or so on equivalent Treasuries. The securities look set for further gains with both foreign and domestic investors seen returning to a market where the central bank has often been the only buyer this year, according to strategists.

The return of real demand would be a world away from the pressure JGBs, as Japanese government bonds are known, came under in June when only unprecedented Bank of Japan buying kept benchmark yields below its 0.25% ceiling. Those yields have since fallen to as low as 0.16% this month as other buyers resurfaced, helped by a global rally on fears of a recession.

“JGBs will be underpinned as domestic investors have no choice but to seek investment in Japan given the negative external environment,” said Makoto Suzuki, a senior bond strategist at Okasan Securities. “Foreign investors may have nearly completed short covering in longer bonds but they will continue to buy short- to medium-term bonds given the favorable cross-currency” premiums.

A pullback in bets on a BOJ policy tweak has already resulted in record monthly purchases from overseas funds in July. Meanwhile soaring hedging costs have wiped out the traditional yield premium Japanese investors enjoyed from markets like Treasuries, leading to expectations of a switch back to JGBs from local buyers such as life insurers.

“From both the external and domestic perspective, there is no reason to push up yields,” said Ataru Okumura, a strategist at SMBC Nikko Securities Inc. “While overseas moves aren’t necessarily driving yields lower, lifer behavior points to downward momentum.”

A big part of the anticipated return of Japanese investors comes from the fact that their traditional alternatives are looking ever more unappealing. Spiraling hedging costs have wiped out returns, with yen-hedged yields on 10-year Treasuries falling to a record low of minus 1.1% this week, according to one measure calculated by Bloomberg in data going back to 1999.

Japanese investors hold the largest pile of Treasuries outside the U.S., over $1.2 trillion worth, but have been cutting their overseas debt exposure as hedging costs skyrocket. Government data this week showed record net selling of foreign bonds in July by life insurers and pension funds.

This is raising expectations that at least part of the money will flow back to the domestic market.

“Momentum is considerably stronger for money to flow back to JGBs than in the past phase of rising hedge costs,” said Okumura. “The probability is high for foreign-debt investments to see negative carry for several more years as short-term rates stay elevated amid high inflation.”

Still, it may not be a straight return with some investors still cautious about the Japanese bond market, given the volatility seen in recent months. A sale of 900 billion yen ($6.7 billion) of 30-year JGBs on Tuesday saw the lowest demand since October.

Market watchers are waiting for July data on local purchases, which will be released later this month.

The flip side of those high-hedging costs for Japanese funds is an additional premium for investors with dollars to spend in Japan, as they get paid to swap the greenback into yen.

And pressure looks to have eased from foreign traders who bet against Japan’s bond market this year on the expectation that rising global inflation would force the BOJ into a hawkish policy shift. The central bank has stuck doggedly to rock-bottom interest rates and its yield-curve control.

Ten-year yen swap rates -- which are popular with international funds -- have collapsed from their mid-June highs, suggesting a paring of at least the most speculative wagers. They were just over two basis points off the BOJ’s 0.25% line in the sand on Tuesday.

“Short-covering is the driver as foreign players unwind expectations for a policy pivot,” said Noriatsu Tanji, chief bond strategist at Mizuho Securities in Tokyo. “Not only has upward pressure on yields halted but downward pressure is being placed.”