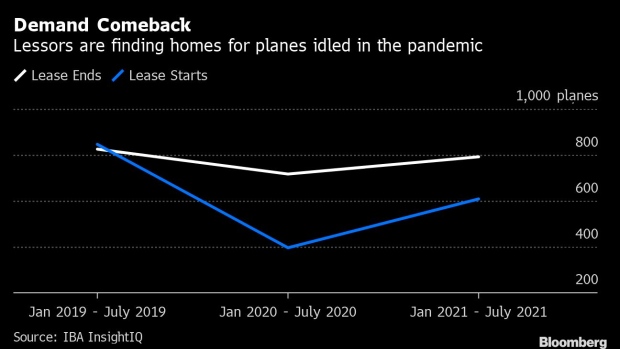 Thierry Vanlancker, chief executive officer of Akzo Nobel NV, poses for a photograph before an event to mark the company's new paint factory in Ashington, U.K., on Tuesday, Sept. 12, 2017. Vanlancker said he will draw on his past at DuPont Co. to introduce ways to improve efficiency at the Dutch paintmaker so it can better compete with former suitor PPG Industries Inc. and an enlarged Sherwin-Williams Co. , Bloomberg

(Bloomberg) -- A bumpy recovery among global airlines has given an unexpected early boost to one corner of the market: demand for aircraft paint. It’s come roaring back as production of new jets rises and pandemic-idled old ones change operators.

At Akzo Nobel NV, the world’s biggest supplier of plane coatings, sales across the product range were back to pre-pandemic levels during the second quarter.

“This was a surprise to us,” Chief Executive Officer Thierry Vanlancker said in an interview. “We thought this was only going to be in 2023.”

The drivers are two-fold. Planemakers Airbus SE and Boeing Co. have been scaling up output, with deliveries surging 70% to 453 new aircraft in the first half from a year earlier.

Ownership turmoil has also played a role, and every time a plane changes hands, it needs to be repainted. While airline failures have dropped off sharply since last year, new carriers are still being created, according to aviation consultancy IBA. The upstarts are picking up leased jets from companies that are defunct, struggling or otherwise slimming down their fleets.

Since January, airlines have returned 790 planes to lessors, while 609 new and used planes have been placed with customers, according to IBA data.

Struggling operators will continue to dispose of leased jets, IBA said, while lessors will stop deferring new-plane deliveries as their cash positions improve.

Akzo Nobel rival PPG Industries Inc. also reported a second-quarter rise in sales volumes to the aerospace industry, as aftermarket activity begins to recover. The U.S. company said it expects to benefit further as air travel revives in the second half.

Amsterdam-based Akzo’s coatings for the interior and exterior of planes, as well as for structural components, can be required no matter how a plane changes hands. Generally, the company has said it’s been able to pass along cost increases on its products to customers.

Vanlancker said demand on used planes has come back “pretty quickly” because flying is getting back to normal in the U.S. Paint sales for new deliveries are also rebounding, as well as for refurbishing the insides of jets.

Akzo benefited twice on some aircraft, the CEO said. First they were painted white, and then later with the colors and livery of an airline. So-called white tails are newly built aircraft that don’t have an end customer -- a rarity until the 2019 Boeing 737 Max grounding and the pandemic that followed a year later. Before then, both major manufacturers were struggling to keep up with demand.