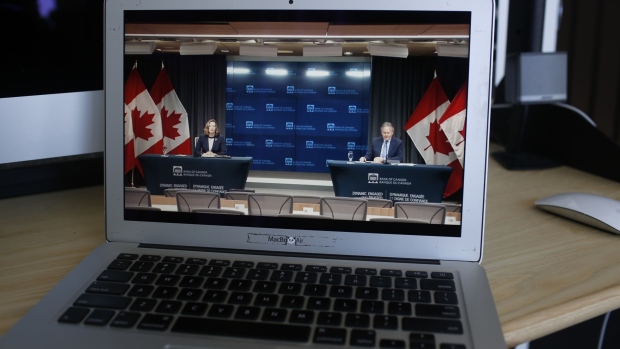 The Bank of Canada believes weaker demand from the global pandemic will outweigh any supply side impacts, putting downward pressures on prices.

While acknowledging that there could be a scarring impact from the crisis that could permanently shrink both demand and supply, the impacts on business and consumer spending are likely to be the larger effect.

“On balance, there is likely to be downward pressure on inflation,” Deputy Governor Tim Lane said in prepared remarks by video conference Wednesday.

In the speech, Lane outlined the measures the central bank has taken to provide the economy with liquidity, including the purchase of assets that have taken the Bank of Canada into uncharted waters -- cutting the benchmark rate to near zero, injecting $300 billion of cash into financial markets and undertaking the first-ever foray into large purchases of government debt. That’s raised some concern the steps could be inflationary once the economy rebounds.

Lane recognized it’s becoming more difficult to measure inflation at such a time, making official statistics less informative about capacity pressures. Given spending may have shifted to items showing faster price increases, the official numbers may be understating the actual inflation experienced by Canadians, he said.

Potential declines in productivity may even put higher pressure on inflation, he said.

At the same time, the closed nature of the economy right now requires policy makers to be even more forward looking than usual and the central bank’s assessment is that downward demand pressures are more significant than supply concerns.

“The Bank’s analysis suggests that the decline in demand stemming in part from weaker business and consumer confidence is likely to have a larger effect,” Lane said. “Based on our assessment that downward pressure on inflation is more likely, we have already cut our policy rate by 1.5 percentage points to its effective lower bound.”

The bank remains willing to adjust operations as needed if there is a move in inflation in either direction from the target.

Lane emphasized that the timing and nature of the economic recovery is uncertain. Some sectors will bounce back faster than others. The air and travel sectors and energy industries are among those that will take the longest to recover.

“Even if the economy as a whole bounces back quickly when the shutdown is eased, some sectors may be permanently affected,” he said. “For example, the pandemic could have a lasting effect on travel of all kinds and undermine long-term prospects for oil demand and prices.”

Canadian inflation in April went negative for the first time since the Global Financial Crisis in part because of falling oil prices. Economists expect inflation to remain subdued in the months to come given that demand has dropped off and spare capacity has built up.