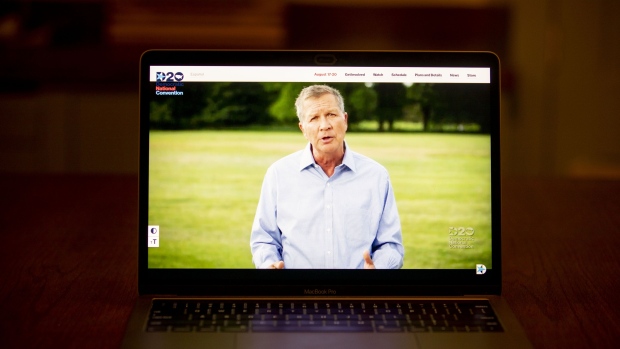 The first night of the Democratic National Convention drew about a quarter fewer viewers on major broadcast and cable news networks, as the virtual event proved a tougher sell than the traditional live gathering four years ago.

About 18.8 million people tuned in to Monday night’s coverage, a decline from 25.8 million four years ago, according to Nielsen data supplied by AT&T Inc.’s CNN. Comcast Corp.’s MSNBC led all networks with an audience of nearly 5.2 million from 10 p.m. to around 11:15 p.m. New York time. CNN followed close behind at 4.8 million viewers, while Fox Corp.’s Fox News Channel averaged about 2.1 million.

The convention debut drew 2.4 million viewers on Walt Disney Co.’s ABC, 2.3 million on Comcast’s NBC and 2 million on ViacomCBS Inc.’s CBS, according to the Nielsen data.

The unusual four-day program, which was moved online due to the coronavirus, began with urgent calls from Democrats to elect former Vice President Joe Biden and push President Donald Trump out of office. It featured music videos and speeches from popular figures such as former first lady Michelle Obama and Senator Bernie Sanders.

The results speak to the overall trouble regularly scheduled TV has had in competing with on-demand viewing and other diversions. While live events are still considered to be big draws, this year’s convention likely suffered from that as well.

The Nielsen figures don’t include online streaming viewership through the convention’s website and elsewhere. While the first night of the convention did worse than four years ago on TV, the Biden campaign said streaming numbers were way up.

On Monday, there were 10.3 million viewers on digital -- a total that includes all streaming services except Amazon.com Inc.’s Prime Video, which hadn’t yet reported its numbers. That’s up from 3 million in 2016, the campaign said.

Total TV and streaming viewership, just under 29 million, edged out the 28.7 million viewers across the six channels and digital in 2016, according to the Biden team. The campaign didn’t provide details about the basis of the online metrics it cited.

The prime-time programming didn’t have the benefit of hours of on-air buildup on TV as the three major networks only aired one hour of the two-hour program. A Biden official stressed that the convention segments had been built to encourage social media shares after the original airing.

MSNBC was the only channel to increase its TV viewership compared with the 2016 convention’s first night, when Obama, Sanders and Senator Elizabeth Warren spoke in support of the first woman to lead a major-party ticket, Hillary Clinton.