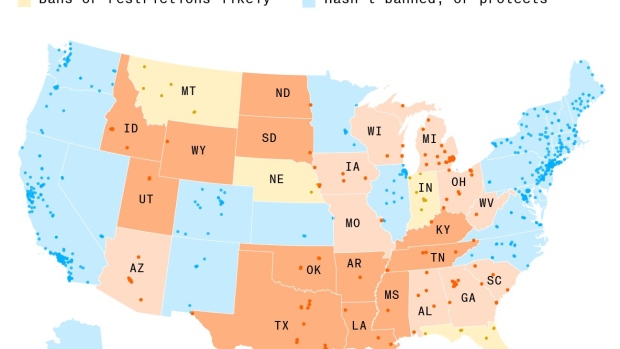 Abortion rights demonstrators outside the US Supreme Court in Washington, D.C., US, on Friday, June 24, 2022. A deeply divided Supreme Court overturned the 1973 Roe v. Wade decision and wiped out the constitutional right to abortion, issuing a historic ruling likely to render the procedure largely illegal in half the country. Photographer: Valerie Plesch/Bloomberg , Bloomberg

(Bloomberg) -- California, Washington and Oregon formed an alliance to ensure abortion access on the West Coast. Michigan’s leader asked the state’s highest court to rule quickly on her suit seeking to codify rights to the procedure. And in Illinois, the governor demanded a special legislative session.

As conservatives across the US celebrated the Supreme Court’s decision that struck down the nationwide right to abortion, Democratic leaders moved to make sure they could ensure access to reproductive care where the politics allow it.

The high court’s ruling sets the stage for a bifurcated America when it comes to the ability to get an abortion, with access to the procedure dependent on where in the country a woman resides. Only 14 states have a Democratic governor along with legislative bodies controlled by the party, while 23 have Republicans in control.

In liberal strongholds, the reaction to the decision was swift and fierce.

Officials in California, home to almost 40 million Americans, vowed to lead other states in serving as an abortion sanctuary. Democratic Governor Gavin Newsom signed legislation Friday that seeks to protect out-of-state abortion seekers from civil actions in their home states, just one of several bills aimed at expanding access.

“I want folks to know all around the rest of the country and many parts of the globe, that I hope we’re an antidote to your fear, to your anxiety, perhaps to the cynicism that many of you are feeling about the fate and future of not only our state but the world we’re living in,” Newsom said at a press briefing, flanked by Attorney General Rob Bonta, state legislators and reproductive rights advocates.

In Michigan, Democratic Governor Gretchen Whitmer vowed to “fight like hell” to keep abortion legal. The state has a law on its books from 1931 that outlaws abortion, but it has been blocked by a temporary lower court ruling. On Friday, she filed a motion with the state’s highest court for an expedited briefing in her suit seeking recognition of abortion rights within the state constitution.

Illinois Governor J.B. Pritzker -- who, like Whitmer and Newsom, is up for re-election this year -- called for the General Assembly to meet in a special session in the coming weeks “to further enshrine our commitment to reproductive health care rights and protections.” New York Attorney General Letitia James pledged her state will remain a haven, saying she’ll “work tirelessly to ensure our most vulnerable and people from hostile states have access to this lifesaving care.”

Sixteen states and the District of Columbia have laws that protect the right to abortions, according to the Guttmacher Institute, a non-profit abortion-rights advocacy group. Twenty-six states are considered “certain or likely” to ban or limit abortion in the post-Roe era. Twenty-two of them have laws or constitutional amendments to prohibit the procedure. The other four have the political composition or took recent action that indicates they would limit access, according to Guttmacher.

States that have pledged to take in more abortion seekers now face questions abut their capacity to handle the influx, said Michele Goodwin, a law professor at the University of California Irvine, and author of “Policing the Womb.” In California, for instance, there could be a nearly 3,000% increase in the number of out-of-state women of reproductive age who could now find their nearest clinic in the state, according to Guttmacher.

“What states may seek to do is to be more creative and progressive in terms of who’s allowed to engage in reproductive health care, and providing economic support,” Goodwin said. “They can also protect doctors who perform abortions from being criminally punished.”

The great divides were on display in Atlanta, where the National Right to Life Committee’s annual convention had just gotten underway Friday morning when the Supreme Court news broke. By the afternoon, Ingrid Duran, the NRLC’s director of state legislation, was scanning a spreadsheet listing which states had pre-Roe abortion bans that are still on the books, which have so-called trigger bans going into effect upon the statue’s fall and other states with varying or no restrictions.

Among the immediate priorities is targeting states such as Georgia, which doesn’t have a pre-Roe ban or a trigger law, but does have a law that bans abortions after the detection of a fetal heartbeat. Blocked from taking effect by a federal appellate court, the goal now is to get the court to let the law proceed, Duran said.

In the states that have established a right to an abortion, National Right to Life will still push for incremental gains, such as enacting parental consent laws, even if critics say targeting states like Alaska or California is a lost cause, she said.

A key challenge is to ensure enforcement of those restrictions that do hit the books, particularly in liberal cities within more conservative states, said David O’Steen, executive director of the Washington-based advocacy group. The Atlanta City Council, for example, recently passed a resolution instructing the city’s police force to treat potential abortion crimes as its lowest possible priority.

In such cases, O’Steen’s group urges states to borrow from Texas’s Heartbeat Act, by allowing private citizens to sue to enforce the law.

“You give grandparents and siblings and the mother herself the right to sue,” O’Steen said. “Simply because in Democratically controlled cities they will seek not to follow the law, we will put civil remedies in place.”

And for states that do vow abortion access, their protections are far from guaranteed should Republicans vastly expand power in Congress and an anti-abortion president is elected, potentially bringing in federal restrictions, said Donna Crane, political science professor at San Jose State University and a former lobbyist for NARAL Pro-Choice America.

“To some extent, it doesn’t matter how many protections a governor or legislature reiterate,” she said. “That only goes so far if Congress or the presidential administration wants to get in on this.”

For now, each state’s rules will make all the difference to abortion seekers. In Washington, Toshiko Grace Hasegawa, a Seattle port commissioner, wrote of the importance of her state’s access, posting on Twitter Friday that she’s had three abortions. In one of them she was in a physically abusive relationship, and in another she and her partner feared potential health risks to the baby.

“None of the decisions were easy. None of them,” she wrote. “But they were my choices to make & live with. Unfortunately, it’s no longer my fundamental right to have a choice. It’s my privilege by living in Washington State.”