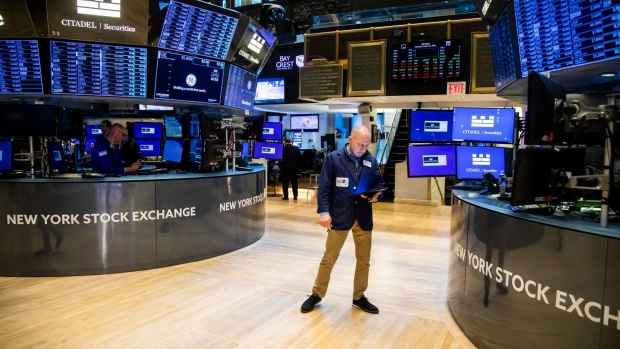 Traders work on the floor of the New York Stock Exchange (NYSE) in New York, U.S., on Monday, Jan. 3, 2022. As 2022 begins, the overriding message from almost 50 financial institutions across Wall Street and beyond is that conditions still look good, but the rip-roaring rallies powered by the reopening are history. , Bloomberg

(Bloomberg) -- House Democrats are readying a proposal to restrict members of Congress, their staff and their families from trading securities.

A framework for legislation is set to be released next week by the Committee on House Administration, according to a person familiar with the matter, who asked for anonymity because the plan hasn’t been made public.

“We’ll have something very soon,” California Democrat Zoe Lofgren, the head of the committee, said Thursday, without giving any details.

Democrats have been working for months on some form of restrictions on stock trading by lawmakers, an issue that has united progressive Democrats and conservative Republicans.

A separate effort to write legislation incorporating several proposals is underway in the Senate.

House Speaker Nancy Pelosi and House GOP leader Kevin McCarthy both have indicated they would support restrictions on stock transactions. McCarthy said Thursday that he was aware a framework was being drafted, but said he hasn’t seen it and will wait until its release to say whether he would back the effort.

House Majority Leader Steny Hoyer said he also hasn’t seen the framework and doesn’t know when any legislation might be voted on.

One of the key points of contention has been whether to include family members in any ban on trading. Pelosi’s husband, Paul Pelosi, made his fortune in real estate and venture capital and frequently draws attention for his stock trades.

It’s also unclear if the legislation would address the judiciary.

Multiple bills have been introduced in the House and Senate, ranging from outright bans on individual stock ownership to fuller disclosure of lawmaker finances. The efforts are directed at overhauling the current law, which bans members of Congress from using nonpublic information available to them for personal benefit and requires members, along with their spouses and dependent children, to disclose security transactions.