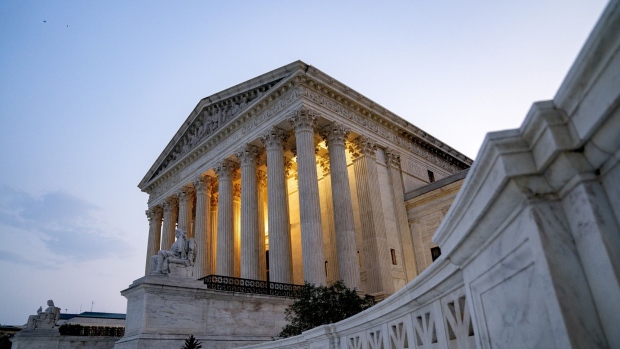 The U.S. Supreme Court in Washington, D.C., U.S., on Monday, Sept. 13, 2021. House Democrats have drafted a package of tax increases that falls short of President Biden's ambition, an acknowledgment of how politically precarious the White Houses $3.5 trillion economic agenda is for party moderates. , Bloomberg

(Bloomberg) -- President Joe Biden will be able to get his nominee to replace Justice Stephen Breyer confirmed with a simple majority vote in the Senate, thanks to a change in the chamber’s rules made by Republicans when they last held control.

That still will require holding together the fragile Democratic voting coalition in the 50-50 Senate through what’s expected to be an onslaught of attacks on the nominee from Republicans and their outside allies.

Senate Majority Leader Chuck Schumer promised on Wednesday after Breyer’s retirement became known to hold hearings by the Judiciary Committee followed by a confirmation vote “with all deliberate speed.”

While moderate Democrats Joe Manchin of West Virginia and Kyrsten Sinema of Arizona have held up Biden’s economic agenda and thwarted Democrats’ drive to overhaul voting rights, they’ve joined in the unanimous Democratic support for Biden’s nominees to lower courts.

Republicans have broadly opposed Biden’s court picks, but some have drawn GOP support.

Biden has pledged to appoint the first Black woman to the Supreme Court. One of the leading candidates for Breyer’s seat, Judge Ketanji Brown Jackson, won Senate confirmation last June to the powerful federal appeals court in Washington on a 53-44 vote.

Graham, who supported President Barack Obama’s first two Supreme Court nominees, has not signaled how he would vote on a Biden Supreme Court pick.

“If all Democrats hang together – which I expect they will – they have the power to replace Justice Breyer in 2022 without one Republican vote in support,” Graham said in a statement. “Elections have consequences, and that is most evident when it comes to fulfilling vacancies on the Supreme Court.”

The situation is a result of the increasingly rancorous partisanship surrounding judicial nominations in the last decade. In 2013, the Senate under Majority Leader Harry Reid jettisoned the filibuster rule for presidential nominees other than the Supreme Court as Republicans repeatedly blocked Obama’s picks.

Although Breyer is likely to remain on the court through the end its term in June and until a successor is confirmed, the timing of his retirement will work in Democrats’ favor.

Senate GOP Leader Mitch McConnell, who led a Republican blockade of Obama Supreme Court nominee Merrick Garland, said last year that he’d be “highly unlikely” to let Biden fill a Supreme Court vacancy in 2024 if GOP wins back the Senate in the November election. He refused to say what he would do if the vacancy occurred in 2023.

But with Democrats currently in control and the filibuster for high court nominees abolished, McConnell’s options for the Breyer seat are limited.

Still, some Republicans are signaling they will put up fight.

GOP Senator Marsha Blackburn of Tennessee, a member of the Judiciary Committee, said a majority of the country has “lost confidence” in Biden’s leadership.

“I will not stand by as President Biden attempts to fill our courts with activist judges who are beholden to progressive interests,” she said in a statement.

Texas Senator John Cornyn, a senior Republican on the Judiciary Committee, took a swipe at Democrats’ handling of Justice Brett Kavanaugh’s confirmation, which was mired in sexual assault accusations, in 2019.

“Whoever the President nominates will be treated fairly and with the dignity and respect someone of his or her caliber deserves, something not afforded to Justice Kavanaugh and other Republican nominees in the past.”

The stakes, however, are lower than in the last several confirmation battles, given replacing Breyer with another liberal justice would not change the balance of power on the court, where conservative justices now hold a 6-3 majority. And there are still nearly three years left in Biden’s term.

Murkowski may be the most likely Republican to back Biden’s pick. She’s up for re-election in Alaska and will likely need Democratic and independent voters on her side against a challenge from a Trump-backed Republican, Kelly Tshibaka.

Murkowski’s crossover appeal was key to her successful runs in 2016 as well as in 2010, when she lost a primary but won as a write-in candidate. She voted against Kavanaugh’s confirmation but for the confirmations of Amy Coney Barrett and Gorsuch.