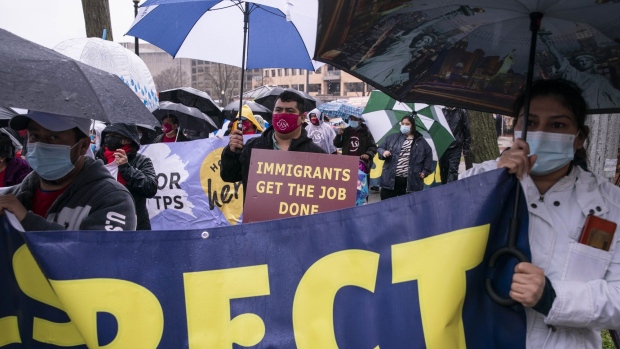 Protesters march in support of H.R. 6, the Dream and Promise Act, legislation that will provide a path to citizenship for people with temporary protected status, on Capitol Hill in Washington, D.C. on March 24. , Bloomberg

Senate Democrats will seek a pathway to citizenship for as many as 8 million undocumented immigrants in a broad economic package they want to pass this year, according to a Senate Democratic aide familiar with the plan.

Democrats are drafting a fiscal blueprint that will kick-start the process by instructing the Senate Judiciary Committee to craft a targeted immigration overhaul bill with a US$120 billion federal budgetary impact, the aide said. Those funds might entail making improvements on U.S. ports of entry, clearing out a backlog of visa applications, or other changes, the aide said.

Of the 8 million immigrants that Democrats want to aid in the economic package, 3 million would be young undocumented immigrants known as “Dreamers,” migrant workers and some with “temporary protected status” because dangerous conditions present risks if they return to their home countries, the aide said. The other 5 million would be “essential workers” who have yet to be defined.

Senate Majority Leader Chuck Schumer says the Senate will act on a US$3.5 trillion budget resolution that reflects much of President Joe Biden’s economic agenda before lawmakers leave for an extended August recess.

Biden has proposed a pathway to citizenship for 11 million people living illegally in the U.S., but House Speaker Nancy Pelosi earlier this year opted for a pared-back approach to attract support from moderate Democrats. The House in March passed two bills that provide legal status for migrant farm workers and a citizenship path for Dreamers.

Senate Judiciary Chairman Dick Durbin, an Illinois Democrat, is leading bipartisan talks on a similar bill, but they have dragged on for months.

The broad economic package, which needs 50 votes to pass the Senate and is unlikely to attract any GOP support, will seek to shift policy in areas that also include climate change, the tax code, Medicare, child and elder care and others.

Democrats will need to unite behind it. The Senate is split 50-50 between the two political parties, with Vice President Kamala Harris able to cast a tie-breaking vote. In the House, Democrats currently have a four-vote margin.

It also will have to meet strict rules designed to ensure any of its provision directly relate to federal revenue, with the Senate parliamentarian able to strike some portions that don’t meet the bar.

The immigration piece is taking on added importance as a few House Democrats say it is key to getting their support on the broader package. Two House Democrats -- Lou Correa of California and Chuy Garcia of Illinois -- say they would oppose the so-called reconciliation package if a pathway to citizenship isn’t in it. A third House Democrat, Jamaal Bowman of New York, tweeted Monday it “must” be in the package, suggesting he also would take a hard line view.

The aide said a recent court ruling that imperiled a program shielding Dreamers from deportation, the Deferred Action for Childhood Arrivals program, could help unify Democrats on the immigration part of the bill, including moderate Arizona Senator Kyrsten Sinema, whose state has a large Latino base.

A federal judge in Texas this month blocked new applications for the program, leaving in limbo tens of thousands of potential applicants.