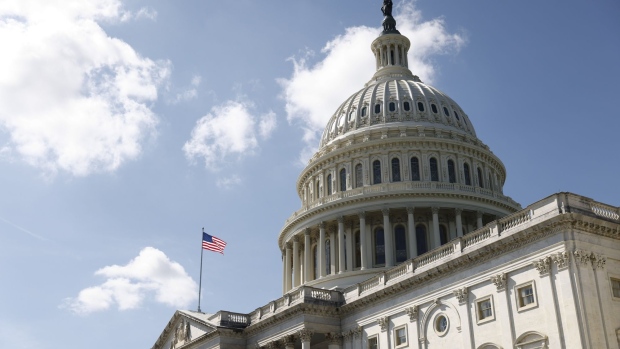 The American flag flies about the US Capitol building in Washington, D.C., U.S., on Monday, Sept. 20, 2021. The fate of President Joe Biden's economic agenda rests largely on Speaker Nancy Pelosi navigating deep Democratic rifts and the minefield of promises she's made to keep the party's moderate and progressive wings moving toward her goal. Photographer: Ting Shen/Bloomberg , Bloomberg

(Bloomberg) -- House Democrats will include a suspension of the U.S. debt ceiling in a must-pass spending bill needed to keep the government open past the end of this month, in a risky move that assures a potentially damaging showdown with Republicans.

The debt ceiling would be suspended through December 2022.

Without a shift in position by one of the two parties, the decision leaves the U.S. on course for a government shutdown and defaults on federal payments as soon as next month.

“This week, the House of Representatives will pass legislation to fund the government through December of this year to avoid a needless government shutdown that would harm American families and our economic recovery before the September 30th deadline,” House Speaker Nancy Pelosi and Senate Majority Leader Chuck Schumer said in a joint statement. “The legislation to avoid a government shutdown will also include a suspension of the debt limit through December 2022.”

The majority party aims to pressure Republicans into backing down on their threat to vote against a debt ceiling increase by attaching it to the stopgap bill, which would keep the government open. The legislation includes money for hurricane and wildfire disaster aid, which could make the package more difficult for some Senate Republicans to vote against.

The federal debt ceiling came back into effect, at $28 trillion, in August and the Treasury Department has warned that without congressional action it may run out of extraordinary accounting measures to avoid a payment default as soon as “sometime” in October.

It remains unclear what Democrats plan to do if the bill combining spending and a debt-ceiling increase fails to pass the Senate, where at least 10 Republican votes will be needed to overcome a 60-vote threshold for cutting off debate.

The Democrats could raise the debt ceiling alone, using a separate partisan budget tool known as reconciliation, but have so far declined to do so -- arguing that the debt is the responsibility of both parties.