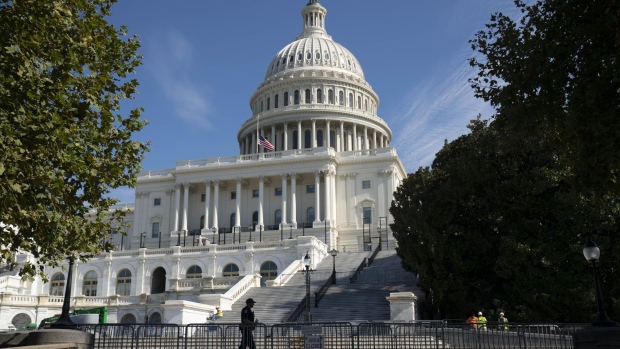 A U.S. Capitol police officer walks along the West Front of the U.S. Capitol in Washington, D.C., U.S., on Friday, Oct. 22, 2021. Congressional Democrats are at odds over both the tax and spending sides of a bill to enact the bulk of the White House's economic agenda, putting in question the goal of party leaders to strike a deal. , Bloomberg

(Bloomberg) -- Spending to fight climate change in the Democrats’ emerging spending plan will total more than $500 billion, making it one of the biggest portions of a bill likely to top $1.5 trillion, according to people familiar with the discussions.

While details are still being worked out, the framework is expected to include expanded tax credits for renewable power, advanced energy manufacturing and electric vehicles, as well as incentives to support investments in electric transmission, energy storage and sustainable aviation fuel.

The effort to develop a blueprint for the environmental portion of the reconciliation bill comes just days before President Joe Biden arrives in Glasgow, Scotland for a United Nations conference on climate change.

Tentative agreement on the bill’s cost was described by three people who asked not to be identified discussing closed-door negotiations. The figure was previously reported by Axios.

A methane fee remained under discussion and was undergoing changes, Democratic senators who emerged from a closed-door caucus meeting Tuesday said.

“It’s in, it’s under discussion, we’re working hard to make sure that that stays,” Senator Chris Van Hollen, of Maryland, told reporters.