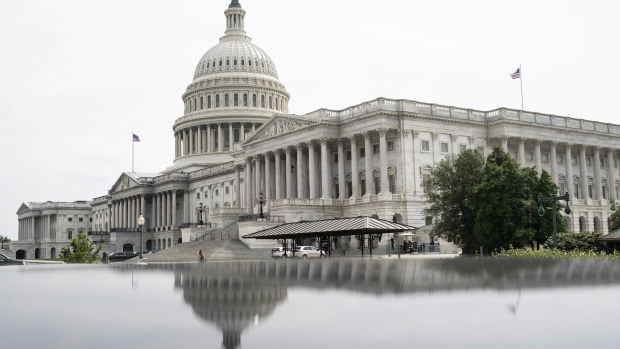 The U.S Capitol building in Washington, D.C., U.S., on Wednesday, June 9, 2021. A group of Democratic and Republican U.S. House members who are trying to keep alive the hope of a bipartisan infrastructure package said late Tuesday they had agreed to $761.8 billion in new spending over eight years. , Bloomberg

(Bloomberg) -- The Democratic National Committee raised $87.1 million over the first six months of the year, more than its Republican counterpart, according to its latest filing with the Federal Election Commission.

Combined with the $3.8 million haul of its Democratic Grassroots Victory Fund, which supports the national and state party committees, the DNC raised more in the first half of 2021 than it did in all of 2017. The two raised $14.4 million in June, and ended the month with $67.6 million cash on hand, less than the GOP.

The Republican National Committee had $81.7 million in the bank, part of a windfall the committee enjoyed thanks to former President Donald Trump’s post-election fundraising, when he repeatedly and falsely blamed widespread election fraud for his loss, and claimed he needed to raise money to challenge the results in court. The RNC took in $85 million so far in 2021 but spent $83.8 million.

Both the RNC and DNC are raising money to aid their candidates in the midterm elections. Republicans have a chance to regain control of the House after having lost it in the 2018 elections. The party went on to lose the presidency in 2020 and the Senate early this year. The House chamber is narrowly divided, with Democrats holding 220 seats compared to 211 for Republicans, with four vacancies. The Senate is split 50-50, with Vice President Kamala Harris able to cast the deciding vote in the case of ties, giving the Democrats control of the chamber.