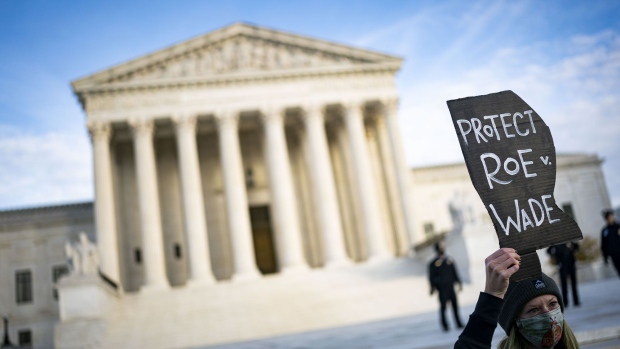 A demonstrator holds a "Protect Roe v. Wade" sign outside the U.S. Supreme Court following oral arguments in the Dobbs v. Jackson Women's Health case in Washington, D.C., U.S., on Wednesday, Dec. 1, 2021. The Supreme Court's conservatives suggested they are poised to curb abortion rights and uphold Mississippi's ban on the procedure after 15 weeks of pregnancy, as the court tackled its most consequential reproductive-rights case in a generation. Photographer: Al Drago/Bloomberg , Bloomberg

(Bloomberg) -- Democrats stand to gain a powerful campaign tool to gin up support just ahead of the 2022 congressional midterm elections, based on the possibility that the U.S. Supreme Court is poised to roll back abortion rights.

While abortion rights are a perennial issue in congressional campaigns, Democratic strategists say that the kind of major shift to restrict access signaled by the court’s conservative majority in a case argued Wednesday would spur their base voters to turn out while moving swing voters away from the Republican Party.

A court ruling is expected by the summer, giving Democrats a powerful pitch to raise money and recruit campaign volunteers as they head into the final stretch before the November elections.

If the issue tipped the balance in even a few races, it could determine control of Congress, where Democrats currently have an eight-seat margin in the House and control the Senate only because of Vice President Kamala Harris’s tie-breaking vote.

Chris Hayden, a spokesman for the Democratic Congressional Campaign Committee, said that Republicans are in a bind because their base wants the Supreme Court to overturn Roe v. Wade, the 1973 ruling legalizing abortion.

“If they have the Supreme Court and they still can’t get it done, that’s going to be a real problem for them,” he said.

Both parties are vying for suburban female voters. Recent gubernatorial elections in Virginia and New Jersey showed that Democrats have lost ground with that bloc, after making gains during President Donald Trump’s administration.

Republicans are currently favored to win back control of at least one chamber due to a combination of gains made from redistricting, President Joe Biden’s low approval ratings and the historical trend of the party in power losing in midterms.

Democratic strategists say that a major court ruling would immediately become a top issue, pointing to polls that show the majority of Americans support the abortion rights recognized in Roe and reaffirmed in 1992.

A recent survey by the DCCC found that the message that Republican candidates would seek to ban abortion was their strongest line of attack, followed by criticizing them for potentially blocking the debt ceiling and opposing letting Medicare negotiate cheaper prices on prescription drugs.

Democratic candidates for Senate are also eager to raise the issue, with New Hampshire Senator Maggie Hassan joining a Zoom press conference on the Supreme Court case earlier this week and Arizona Senator Mark Kelly tweeting his opposition to the Mississippi law at the heart of Wednesday’s Supreme Court case that bans abortion after 15 weeks.

Apart from the national implications, abortion also could become an issue in some of the key Senate battlegrounds for different reasons.

In Arizona, Georgia, Ohio and Wisconsin, existing laws that restrict abortion would automatically go into effect if Roe were overturned. Incumbent Republican Senators Marco Rubio of Florida and Ron Johnson of Wisconsin, who has not yet decided whether he will run, would also face scrutiny over their votes to confirm the Supreme Court justices.

The likely Republican nominee in Nevada, former state attorney general Adam Laxalt, has a record of opposing abortion rights, and wide-open Republican primaries in Arizona, New Hampshire, North Carolina, Ohio and Pennsylvania in the spring could push candidates to stake out stronger positions against abortion rights that Democrats would use against them in the general election.

Republican Senate “candidates end up taking positions in the primary that are really unpopular with the general electorate,” said Jazmin Vargas, national press secretary for the Democratic Senatorial Campaign Committee.

If the court rolls back abortion rights at the federal level, it would also reopen the issue among state lawmakers and governors.

Nikki Fried, who is running for the Democratic nomination for governor in Florida, said she would make abortion a top issue in her race against incumbent Republican Governor Ron DeSantis if the court restricts abortion access, especially if the state legislature passed restrictive bills currently under consideration.

“My own grandmother had to fly to Cuba in order to get an abortion,” she said. “That is not something that the people of our state or our country want to experience again.”

Not everyone is convinced that the issue will be a big winner for Democrats, however.

Republican strategist Sarah Longwell said that while many of the independents, Democrats and swing voters in her focus groups say they are pro-abortion rights, they don’t talk about the issue unless asked, even when it was in the news due to things like a recent controversial Texas law restricting abortion access.

Longwell said that could be an indication that support for abortion rights is not intense enough to change the outcome of midterm races.

“The people who are pro-life are single-issue voters, but the ones who are pro-choice are not necessarily,” she said.

Marcela Mulholland, political director for the progressive group Data for Progress, said that support for upholding Roe v. Wade crosses party lines. In a national poll of likely voters conducted in early September, Data for Progress found that Democrats backed upholding Roe by a 62-point margin, independents by 41 points and Republicans by 10 points.

She said that any enthusiasm gap on the issue would be reversed if the decision were overturned and abortion rights were no longer guaranteed by Supreme Court precedent.

“People don’t like to lose rights that they have already,” she said. “Any change to the status quo to strip people of rights that they’ve had for years will create a significant backlash.”