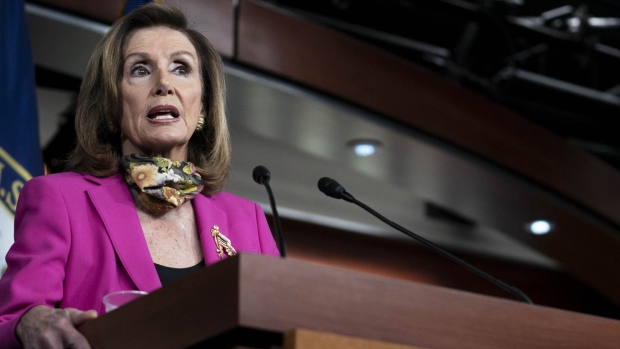 House Speaker Nancy Pelosi and other top Democrats on Wednesday rolled out a sweeping draft package of reforms they say would prevent future presidential abuses of power and more effectively combat foreign interference in U.S. elections.

The initiative includes bills to expedite enforcement of subpoenas, curbs on the use of presidential pardons and the enhancement of federal whistle-blower protections as well as requirements for campaigns on reporting foreign contacts.

Some of these proposals directly relate to the frequent and ongoing stand-offs between President Donald Trump’s administration and Democratic-led House investigative committees. Those have tested the legal limits of constitutional checks and balances of the two branches of government.

It’s uncertain, however, whether a Democratic-led House would maintain its appetite for advancing the reforms if Democrat Joe Biden defeats Trump in November.

“Since taking office, President Trump has placed his own personal and political interests above the national interest by protecting and enriching himself, targeting his political opponents, seeking foreign interference in our elections, eroding transparency, seeking to end accountability, and otherwise abusing the power of his office,” seven House committee leaders wrote in a joint statement, before releasing the package with Pelosi.

Led by House Intelligence Chairman Adam Schiff, Judiciary Chairman Jerrold Nadler and Oversight and Reform Chairwoman Carolyn Maloney, the seven chairs added: “It is time for Congress to strengthen the bedrock of our democracy and ensure our laws are strong enough to withstand a lawless president.”

Some of the proposals would seek to clear up such matters as empowering courts to levy fines on government officials who deliberately fail to comply with congressional subpoenas, or tackle other issues such as whether presidents and vice presidents can be held accountable for criminal conduct and preventing them from using their offices as a shield to avoid legal consequences.

Lawmakers likened the package to measures enacted after the Watergate scandal in the 1970s.

“After Watergate, Congress enacted a series of landmark laws and reforms,” Schiff said. “They changed the way politics is conducted. They established laws to prevent the abuse of authority and to ensure that it would be discovered.”

Chances are slim the legislation -- dubbed the Protecting Our Democracy Act -- will actually advance in the House, much less the Republican-led Senate. Adding to the doubt is that fact that Congress is in the late stages of this two-year congressional session and the general election is 41 days away.

Maloney said that she hopes there can be hearings on the measure before the end of the session and that the bill will be part of the next president’s agenda for the first 100 days in office.

The seven committee leaders described the package as a work in progress, acknowledging some matters require more information and legal refining.

But they described it as an early marker for changes needed “not only because of the abuses of this president, but because the foundation of our democracy is the rule of law and that foundation is deeply at risk.”

Part of the aim of the legislation is to stabilize the U.S. system of governance regardless of which party controls the presidency, Representative Katie Porter, a California Democrat, said.

“Each one of these reforms are part of how we rebuild the American public’s confidence in government,” she said on a Center for American Progress Action Fund panel.