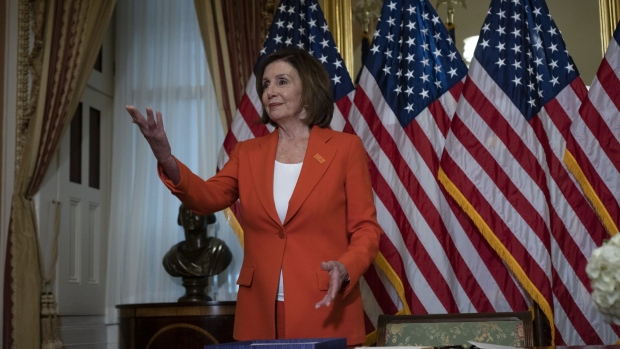 House Democrats took a significant step toward opening an inquiry into impeaching President Donald Trump as the House Judiciary Committee asked a federal court to force the release of grand jury information from Robert Mueller’s investigation.

The suit filed Friday and approved by panel chairman Jerrold Nadler, explicitly cited Congress’s impeachment authority, marking the first time the Democrats have made an official move in that direction.

“Because Department of Justice policies will not allow prosecution of a sitting president, the United States House of Representatives is the only institution of federal government that can now hold President Trump accountable for these actions,” the Democrats argued in the suit.

Actually opening a formal impeachment inquiry would be a politically risky step heading into the 2020 presidential election, which is why House Speaker Nancy Pelosi has been trying to restrain her party from doing so.

But Pelosi approved the Judiciary panel’s filing, according to a person familiar with the matter, a sign she is under increasing pressure to step up scrutiny of the president after Mueller’s underwhelming performance in two hearings this week. The court filing was signed by House General Counsel Douglas Letter.

"We are continuing investigations of the president’s malfeasances," Nadler told reporters. "We will consider what we have to consider -- including whether to recommend articles of impeachment to the House.”

But he added that his committee also may take other actions in response to wrongdoing by the president, who frequently tweets that the investigation of Russia’s interference in the 2016 election found “NO COLLUSION, NO OBSTRUCTION!”

The Democrats said in the lawsuit that they are seeking access to “all underlying grand jury materials that bear directly on President Trump’s knowledge of any potential misconduct during the 2016 election campaign and afterward -- and, thus, bear directly on the president’s state of mind at the time of relevant events.”

They said they need grand jury materials that were referred to in Mueller’s 448-page final report but redacted in the version that Attorney General William Barr released to Congress and the public as well as “any underlying grand jury materials” that are relevant. Barr has argued the redactions were necessary to protect the traditional secrecy of grand jury proceedings.

The staff of Representative Doug Collins of Georgia, the Judiciary Committee’s top Republican, questioned in a memo why Democrats are raising impeachment without moving to open a proceeding.

“The House is either formally in impeachment proceedings, which involve both an impeachment inquiry and consideration of articles of impeachment, or we are not," Jessica Andrews, a spokeswoman for committee Republicans led by Collins, said in the memo.

The move into the courts signaled determination by House Democrats to press ahead with investigations of Trump and his administration despite the White House’s blanket refusal to turn over requested documents or allow testimony by past and present administration officials. Mueller’s reluctant and halting performance before two House committees on Wednesday undercut hopes by Democrats that he would jump-start the stalled inquiries.

Nadler said Democrats may go to court again early next week seeking to enforce their subpoena compelling former White House counsel Don McGahn to testify and turn over documents unless he reaches an agreement with the committee.

Nadler said that while the 74-year-old Mueller “seemed older” than some remembered him, his testimony made clear that “the Trump campaign welcomed help from Russia and repeatedly lied about it” and that Trump sought to obstruct the special counsel’s probe.

“No one can be above the law -- not even President Trump,” Nadler of New York said.

Pelosi denied on Friday that she’s “trying to run out the clock” on impeachment.

“We will proceed when we have what we need to proceed. Not one day sooner," Pelosi told reporters.

Still, a growing number of Democrats are signaling support for impeachment or least an impeachment inquiry. Representative Katherine Clark of Massachusetts, a member of House leadership, said Thursday that she backed beginning proceedings against the president, and she was joined Friday by Representatives Ann McLane Kuster of New Hampshire and Mike Levin of California.

“I can’t ignore the corruption and obstruction we witness every day from President Trump,’’ Levin said in a video on Twitter. “I now support an impeachment inquiry in order to get the truth for my constituents.’’