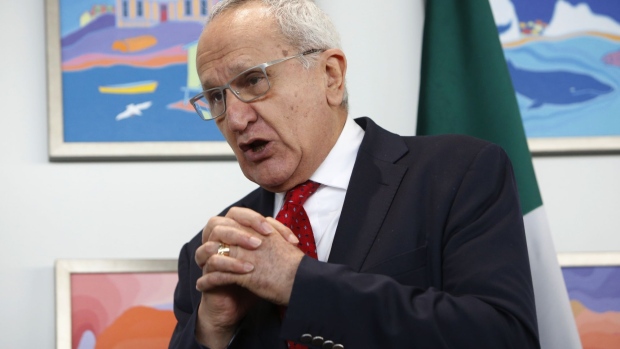 House Democrats said Wednesday that a deal on the stalled U.S.-Mexico-Canada free-trade agreement is within reach and urged Mexico to accept a compromise on labor-rights enforcement.

“We are on the 2 1/2-yard line,“ Ways and Means Chairman Richard Neal said about efforts to wrap up negotiations on the replacement for Nafta and clear the way for approval in Congress.

Leaving the meeting, Seade said there were still outstanding issues and that he’d return on Thursday to continue negotiations. He pointed out that Mexico has already accepted a lot of changes as negotiators try to accommodate the demands of House Democrats who will decide whether and when Congress will vote on the trade agreement.

One of the concerns raised by Democrats includes enforcement of stricter labor standards, especially in Mexico. Seade said there were still details to be worked out, but bringing in U.S. inspectors to monitor Mexican companies was off the table.

While Seade ruled out U.S. inspectors in Mexican factories, he told reporters that Mexico was open to a fast-track arbitration process to address labor-rights violations. Gomez said the compromise does not involve “rogue” U.S. inspections, but that there is an element of monitoring involved to ensure compliance.

According to people briefed on the deal in Mexico, the labor proposal aims to make dispute settlement more effective. Disputes could take into account enforcement of Mexico’s overhaul to improve labor conditions, but wouldn’t allow investigators to just show up on any day to a factory unannounced, the “lone ranger” type of inspections that Seade has rejected.

On another sticking point for Mexico, the White House and Democrats suggested removing a provision guaranteeing 10 years of data protection for biologic drugs, according to people briefed on the deal. That would be a victory for both Democrats and Mexico, which had opposed including the protection in the USMCA before it was signed one year ago.