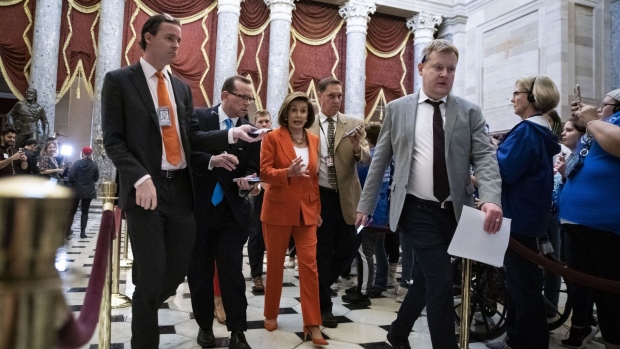 Pelosi on Capitol Hill yesterday. Read an exclusive​​​​​ report by Stephanie Baker and Daryna Krasnolutska on the Ukrainians’ befuddlement that resulted form a Trump request on his now-infamous July 25 phone call with President Volodymyr Zelenskiy. Click here for Bloomberg’s most compelling political images from the past week. Photographer: Al Drago/Bloomberg , Bloomberg

A year from the 2020 election, Democrats have gone all in on impeaching Donald Trump — with no certainty of whether the effort will help or hurt their bid to woo voters.

The new, soon-to-be-public phase of the House inquiry that Speaker Nancy Pelsoi launched yesterday has no explicit timetable, no defined scope and no indication the White House will cooperate. Not a single Republican backed it.

In many ways, Pelosi is taking Congress and the country into the exact politically perilous place she long sought to avoid, Steven T. Dennis and Billy House write.

With only the slimmest majority of public support in polls, many Democrats are nervous, knowing voters will hold them to account for whatever happens between now and then.

Much will hinge on whether Trump can maintain the enthusiasm of his base and the backing of more moderate Republicans and independents. The president will road-test his response at a rally today in Mississippi, a conservative stronghold.

It’s not just the White House in play next year. The Senate and House majorities potentially are too. If public sentiment shifts over the inquiry, the lack of Republican defections from Trump so far could return to haunt some party lawmakers next Nov. 3.

For both parties, the stakes are high.

Brexit fallout | The U.K.’s third election in five years is promising the most radical shakeup of Britain's economy in decades. Prime Minister Boris Johnson’s Conservatives want a divorce agreement they say will open an era of free trade and self regulation. But that runs the risk of shrinking growth.

Missile threat | North Korea test-launched another volley of what appeared to be short-range ballistic missiles, in a show of firepower that reminded the U.S. of Kim Jong Un’s threat to walk away from nuclear talks in the new year. Pyongyang has fired at least 20 missiles since breaking a testing-freeze in May, with experts saying the effort is aimed at improving its capability to deliver nuclear warheads to all of South Korea and parts of Japan.

Mixed signals | Trump will pass on an opportunity to meet with Asian leaders at a major summit in Bangkok this weekend, raising questions about the U.S.'s strategy in a region. The lack of a high-profile U.S. delegation at the Asean meeting comes at a time when the Trump administration has pledged to thrash out a trade deal with China.

Weighing in | As protests rage in Hong Kong against China’s increased grip over the city, Beijing signaled it would intervene more in everything from education to the selection of the city’s top leader. The Communist Party made a series of broad but vaguely worded commitments to wade into some of the former British colony’s most divisive issues. Opposition lawmakers saw the makings of a crackdown.

Islamic State creep | Islamic State leader Abu Bakr Al-Baghdadi is dead, but his followers are expanding across remote patches of Africa. In the arid band on the southern fringe of the Sahara Desert that stretches through some of Africa’s poorest and least-governed countries, they’re launching attacks against government forces, while the movement said yesterday it named a “new caliph:” Abu Ibrahim al Hashimi al Qurashi.What to Watch:

Pop quiz, readers (no cheating!). Trump’s White House once explored whether the U.S. could cut off taxpayer funding for a network of charter schools affiliated with a political opponent of which world leader? Send us your answers and tell us how we’re doing or what we’re missing at balancepower@bloomberg.net.

And finally … Vladimir Putin was a “prompt, disciplined and conscientious” spy who was “morally upstanding,” according to a declassified KGB profile of the Russian president displayed at St. Petersburg’s state archive. “Comrade V.V. Putin constantly improves his ideological and political standards.” The report shows Putin, who served in the Soviet Union’s feared security service from 1975 to 1991, did not stand out, according to one former KGB general. “Usually we wrote ‘morally upstanding’ when there was nothing else to say,” he said.

--With assistance from Daniel Ten Kate and Philip Heijmans.

To contact the editor responsible for this story: Michael Winfrey at mwinfrey@bloomberg.net, Flavia Krause-Jackson