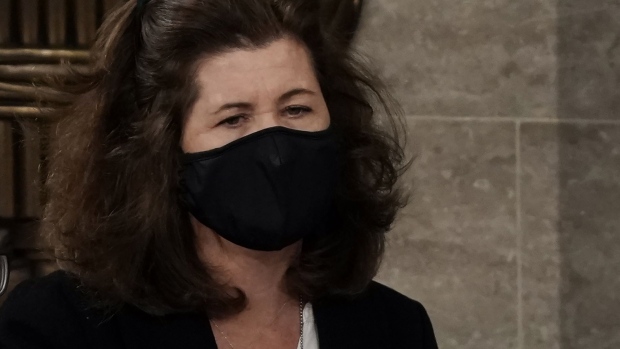 Senate parliamentarian Elizabeth MacDonough works during a joint session to ratify the 2020 election at the US Capitol in Washington, D.C., on Jan. 6, 2021. , Photographer: J. Scott Applewhite/Pool/Getty Images

The little-known arbiter of Senate rules is expected to determine as soon as Friday whether key portions of their plan complies with strict budget requirements -- including a $35 monthly cap on insulin prices, requirements for North American production to qualify for electric vehicle tax credits, and prescription drug inflation rebates.

MacDonough, who has worked in the parliamentarian’s office since 1999, was appointed to the top spot by then-Majority Leader Harry Reid in 2012. She, or one of her aides, often can be seen at the Senate dais, sometimes whispering guidance to the presiding officer. While she has a powerful role in the chamber, it’s mostly a behind-the-scenes job.

It’s also an often thankless job in a bitterly divided chamber where her decisions often decide the fate of the majority party’s agenda.

She has at times thwarted the ambitions of both parties. While technically the Senate’s presiding officer makes rulings, the parliamentarian’s advice on whether provisions comply with budget and other rules that tend to be treated as gospel.

Both parties have been lobbying her and her staff in formal, closed-door sessions about whether various provisions of the Democrats’ legislation qualify.

If MacDonough says a provision doesn’t comply, it would almost certainly be stricken from the bill. Her advice last year frustrated Democrats’ efforts to enact immigration provisions and a minimum-wage hike when she said they didn’t comply with rules allowing bills to elude a 60-vote filibuster.

Democrats are relying on “reconciliation,” an arcane process that allows some budgetary matters to be passed with a simple majority. But under the Byrd Rule, named for former West Virginia Senator Robert Byrd, provisions must affect the budget in a significant way to qualify. And that’s ultimately a judgment call.

It takes 60 votes to keep a provision in a budget bill if the presiding officer rules it out of order -- and that’s unlikely with the legislation now under consideration given uniform Republican opposition.

The Senate is expected to start voting on the bill Saturday afternoon, and MacDonough will play a key role at the end of the debate during what’s called the “vote-a-rama” -- a rapid-fire, theoretically unlimited series of amendments that ends when senators eventually grow tired of voting -- usually after an all-nighter.

In 2017, she decided key provisions of Republicans’ efforts to repeal and replace the Affordable Care Act, concluding they were more about policy-setting than budgeting. But she later blessed a Republican move to set the Affordable Care Act’s individual mandate tax penalty to zero, which freed up hundreds of billions for additional tax cuts in the GOP tax overhaul.

Texas Republican Senator Ted Cruz argued in 2017 that MacDonough’s rulings could be ignored by then-Vice President Mike Pence, saying that under the law he could rule repealing the Affordable Care Act including its regulations complied with the rules. Other Republicans, however, declined to go down that road, viewing it as tantamount to eliminating the filibuster entirely.

Likewise last year some advocates on the left talked of either firing MacDonough or ignoring her, but that doesn’t have support among senators, including Democrat Joe Manchin of West Virginia, who has repeatedly pledged to uphold the Byrd Rule and the filibuster rule.

MacDonough, the first woman to hold the top position, was a trial attorney at the Department of Justice before joining the parliamentarian’s office.