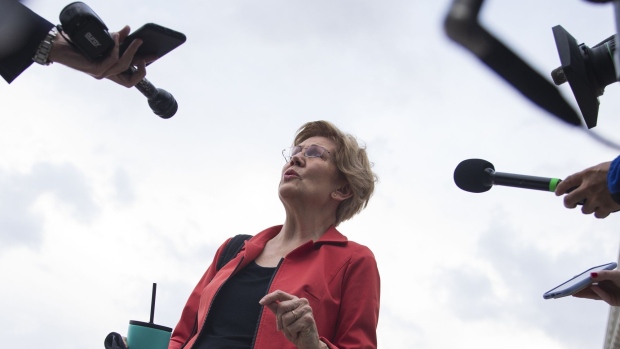 (Bloomberg) -- Three key senators released legislation that would require some U.S. companies to pay a minimum 15% rate on profits they report to their corporate shareholders, in lawmakers’ latest bid to find consensus behind revenue-raising measures to fund President Joe Biden’s economic agenda.

The proposal, sponsored by Senate Finance Committee Chairman Ron Wyden and Senators Elizabeth Warren and Angus King, an independent who caucuses with Democrats, would require companies that report more than $1 billion in profits to shareholders pay at least a 15% tax rate even if they qualify for lots of tax breaks. Democrats are planning to use this as an alternative to raising the 21% corporate income-tax levy, after opposition from Senator Kyrsten Sinema about raising top-line rates.

“The U.S. tax code allows large corporations to pay little or no tax because they are able to exploit a host of loopholes, deductions and exemptions to drive down their tax liability,” according to a summary of the plan released Tuesday. “While these companies report billions in profits, they often pay no income tax to the IRS and leave hardworking families holding the bag.”

This minimum tax would apply to about 200 companies that don’t pay a high-enough rate under the regular corporate-tax system, according to the lawmakers. It could raise hundreds of billions of dollars of tax revenue over a decade, the summary said.

The corporate minimum tax represents a seismic shift from how corporate taxes are generally computed, which is based on their income minus credits and deductions. Instead, this levy would be computed using a separate accounting method -- the one used for financial statements -- to compute profits and apply a 15% tax.

The proposal would require companies that can avail themselves of lots of credits and deductions to still pay a base level to the Internal Revenue Service. The idea has gained popularity in Democratic circles after companies such as Amazon.com Inc., Nike Inc. and Netflix Inc. have been able to avoid paying any federal income taxes in recent years because they had so many tax breaks to offset their liabilities.