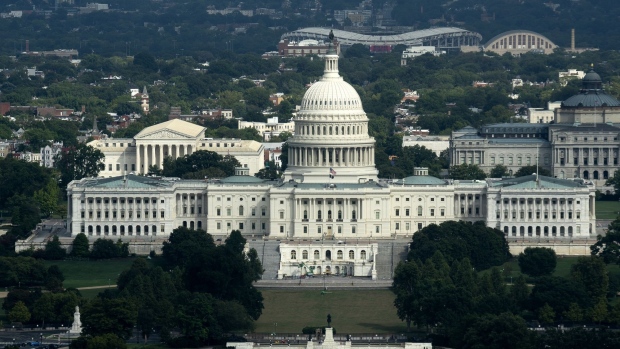 (Bloomberg) -- House Democrats set up a Tuesday vote on a bill that would suspend the U.S. debt ceiling through December 2022 and temporarily fund the government to avert a shutdown at the end of this month.

The debt ceiling suspension is urgently needed because the Treasury Department has warned it could run out of accounting measures to stave off a payment default some time in October. But Republicans have vowed to block the measure in the Senate as long as Democrats are pursuing their package of tax hikes and spending.

That standoff raises the chances of twin fiscal disasters -- a government shutdown and the Treasury defaulting on payments -- that could have consequences for Wall Street and the broader U.S. economy.

The stopgap bill would prevent a shutdown of most U.S. federal agencies and keep them operating through Dec. 3.

The bill also contains $28.6 billion for recovery from a series of hurricanes and wildfires as well as $6.3 billion to resettle refugees from the failed U.S. war in Afghanistan.

Republicans in the House and Senate are expected to vote against the bill over the debt ceiling provision. That makes it likely the Senate will have to revise the spending bill, stripping out the debt ceiling language, before the Oct. 1 deadline.

The political endgame on the debt ceiling remains murky if Senate Republicans continue to block the suspension.

House Budget Chairman John Yarmuth said Democrats alone can raise the debt ceiling using the fast-track budget process that bypasses the Senate filibuster -- but doing so would require specifying a numerical debt ceiling increase rather than a time-limited suspension.

Democrats are also loathe to take sole political responsibility for the debt, which was increased under both Republican and Democratic administrations, ahead of the 2022 midterm elections.

The U.S. debt ceiling came back into effect in August after a two-year suspension. The 2019 partisan debt ceiling deal was approved by both parties and the Trump administration in conjunction with increased budget caps on regular domestic and military spending.

Congress is seeking a similar top-line appropriations deal this fall ahead of the planned December expiration of the proposed stopgap spending bill. This week the House is set to vote on a military policy bill endorsing a $24 billion increase for the Pentagon, a move that could ease Republican agreement on top-line numbers and prevent a shutdown showdown in December. That would allow Congress to pass the 12 regular annual spending bills for 2022, likely as a giant omnibus package.