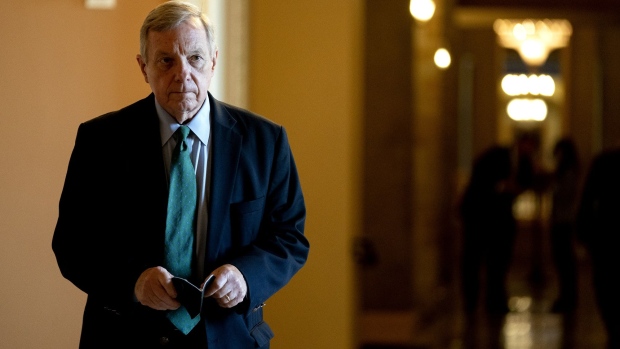 Senator Dick Durbin, a Democrat from Illinois, departs Senate Democrat policy luncheons at the U.S. Capitol in Washington, D.C., U.S., on Thursday, Oct. 7, 2021. The Senate is nearing a deal on a short-term increase in the debt ceiling that would pull the U.S. from the brink of a payment default but threatens to exacerbate year-end clashes over trillions in government spending. , Bloomberg

(Bloomberg) -- Senate Democrats have abandoned plans to achieve a pathway to citizenship for millions of undocumented immigrants as part of President Joe Biden’s economic agenda, and instead are pursuing a proposal that would provide temporary deportation protections.

The measure would provide temporary immigration parole status to millions of undocumented immigrants, which would allow them to stay lawfully in the U.S. and to apply for work permits, said Senator Dick Durbin of Illinois, the No. 2 Democratic leader in that chamber.

“It will bring peace of mind to millions of people who have been here 10 or 20 years,” Durbin told reporters.

Democrats will put the plan before the Senate parliamentarian, who twice denied their efforts to provide green cards and a pathway to citizenship for millions of people as part of the legislative package encompassing much of Biden’s agenda.

The parliamentarian, Elizabeth MacDonough, had said the earlier proposals didn’t meet the strict requirements for the budget reconciliation process, which Democrats are using to push the package of between $1.5 trillion and $2 trillion through the Senate with only Democratic support. In part, she said, the earlier approaches represented a “weighty policy change” that isn’t largely budgetary in nature.

Parole has been allowed under federal immigration law since the 1950s, and has been used by presidents in both parties to bring in a number of groups to the U.S. Those included Cuban refugees in the 1960s and Afghan nationals currently settling in the U.S. after the recent chaotic withdrawal of U.S. troops there.

Once paroled in the U.S., people can apply for work permits and for “advance parole,” which allows them to travel outside the U.S. and return. Some people can later adjust their status and obtain a green card.

Durbin said he didn’t immediately have an estimate for how many people the latest proposal would affect. The Center for American Progress, a liberal think tank, earlier this month estimated that 7.1 million people could benefit if a parole provision were drafted to include anyone who entered the U.S. before Jan. 1, 2011.

Democrats and outside immigration advocacy groups are hoping MacDonough will view the new approach as within the framework of the so-called Byrd Rule that governs what can and can’t be including in a budget-reconciliation bill. They’re arguing the new approach is not nearly as extensive as providing a citizenship pathway and that it builds on existing law, rather than creating a new one.

Once Democrats submit it, her decision could come within days. The stakes are high for Democrats who still are negotiating myriad disputes over the package’s size and scope between moderate Democrats like Senator Joe Manchin of West Virginia and progressives like Representative Pramila Jayapal of Washington. Including immigration-law changes could help keep wayward Democrats in the fold.

Durbin said it isn’t clear yet whether Democrats would have time to try again with another immigration proposal if this third one is rejected.

Immigrant-advocacy groups are getting particularly restive. Some are calling on Senate Democrats to take the highly unusual step of disregarding the parliamentarian’s ruling if she turns down this latest proposal. It’s not clear yet whether Senate Majority Leader Chuck Schumer and his team would be willing to try, and at the very least Manchin and Democratic Senator Kyrsten Sinema of Arizona would likely find it objectionable.

Immigration groups, who are key to helping to turn out the Latino vote in next year’s midterms, insist they aren’t taking “no” for an answer.

“Democrats will meet accountability at the ballot box if they fail to deliver legalization for our communities, and for the country, in this reconciliation package,” said Lorella Praeli, co-president of Community Change Action.