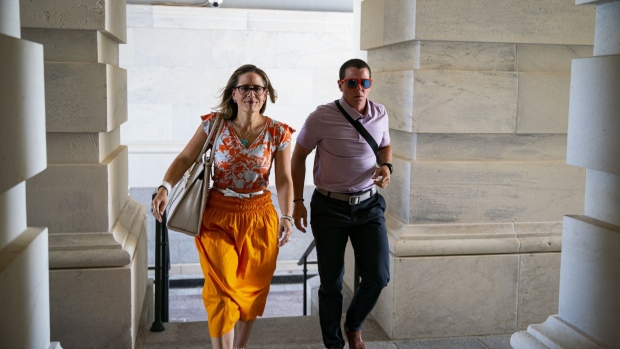 Senator Kyrsten Sinema, a Democrat from Arizona, arrives for a vote at the US Capitol in Washington, D.C., US, on Thursday, Aug. 4, 2022. Sinema is seeking to preserve a tax break for investment managers and narrow a levy hike on large corporations in the economic package Democrats want to pass as soon as this week. , Bloomberg

Sinema, an Arizona Democrat, has opposed narrowing the carried-interest loophole and expressed concern about the effects of the 15% corporate minimum tax on large companies proposed in the Democrats’ bill.

Changing those provisions would significantly decrease the revenue the bill raises, posing a potential problem with Manchin, who wants the measure to reduce the deficit.

The 1% excise tax on companies when they buy back their own stock would raise less than the $124 billion estimated during earlier talks. But it could still help make up the $13 billion loss in funds that would come from increasing the holding period for carried interest from three to five years and the approximately $100 billion that would be lost if Democrats exempt tax credits for depreciation and cost recovery from the minimum tax.

Manufacturers are pressing hard for such an exemption, arguing that the bill as written will create a disincentive for investment and hurt US manufacturing competitiveness.

Senate Democrats need support from all 50 members of their caucus to pass the bill by a simple majority under special budget rules. Republicans are united against the measure.

Democrats are scrambling to come up with changes to satisfy Sinema, who is also seeking $5 billion in drought resiliency funding funds, which would benefit her state. Schumer said Thursday that he plans to bring the Senate into session on Saturday to begin marathon votes on the budget reconciliation bill.

As currently written, the bill would generate $739 billion in revenue and reduce the deficit by some $304 billion. It also would spend $370 billion on climate change and energy programs while extending Obamacare premium subsides for three years.