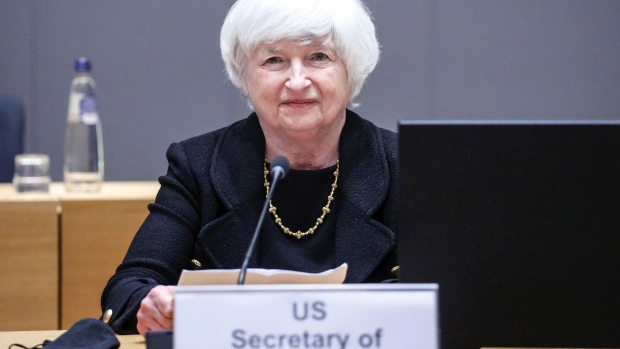 Janet Yellen, U.S. Treasury secretary, ahead of round table talks at a Eurogroup meeting of European Union (EU) finance ministers in Brussels, Belgium, on Monday, July 12, 2021. U.S. Treasury Secretary Janet Yellen will press EU officials in Brussels this week to reconsider their plan to propose a digital levy after securing the Group of Twenty’s endorsement for the principles of a global corporate-tax agreement. Photographer: Valeria Mongelli/Bloomberg , Bloomberg

(Bloomberg) -- House Democrats are working with the Biden administration to add bank account reporting requirements to their tax bill, a measure that could be used to pay for a modification of the cap on the federal deduction of state and local taxes.

Treasury Secretary Janet Yellen urged Neal in a letter obtained by Bloomberg to include the requirements and to draft them in a way that ensures “the reporting regime is sufficiently comprehensive, so that tax evaders are not able to structure financial accounts to avoid it.”

A broader proposal would be best for enhancing the IRS’s enforcement capabilities, she said in the letter, dated Tuesday. IRS Commissioner Charles Rettig wrote a separate letter backing the bank reporting measure as a way to close the tax gap -- the shortfall between what’s owed and what’s paid.

Rettig said that increasing third-party reporting not only helps the IRS catch tax evaders but also helps compliant taxpayers, by decreasing the likelihood they will face a costly and time-consuming audit.

The reporting proposal, previously proposed by President Joe Biden, would require banks and other financial institutions to report customers’ account flows of $600 or more to the IRS. The administration has estimated that that would generate nearly $463 billion in revenue over 10 years, but Congress’s official tax scorekeeper has yet to weigh in.

Banks, credit unions and some consumer rights groups have objected to the reporting proposal, warning it infringes on customers’ privacy, threatens data security, and would increase compliance costs for financial institutions.

Mark Mazur, the acting Treasury assistant secretary for tax policy, said it’s the department’s understanding that Congress is considering a bank-reporting proposal that is narrower than what Biden proposed. A narrower measure would raise less revenue, perhaps in the range of $200 billion to $250 billion over 10 years, he said in a memo attached to Yellen’s letter.

Any revenue generated from a bank-reporting measure could help pay for changes to the $10,000 limit on the deduction for state and local taxes -- a priority for Democrats in high-tax states.

“I’ve heard it discussed,” House Ways and Means Committee member Bill Pascrell told Bloomberg Wednesday. But he also noted that several proposals are under consideration, and that he’s not sure how serious this one is.

A senior congressional aide familiar with the talks confirmed there has been what the aide termed as chatter about using the bank reporting revenue to pay for the SALT change.

Pascrell said earlier in the day that House Democrats are looking at several options for the SALT deduction, which was capped at $10,000 under Republicans’ 2017 tax law. Ideas include raising that cap and eliminating it for a few years.