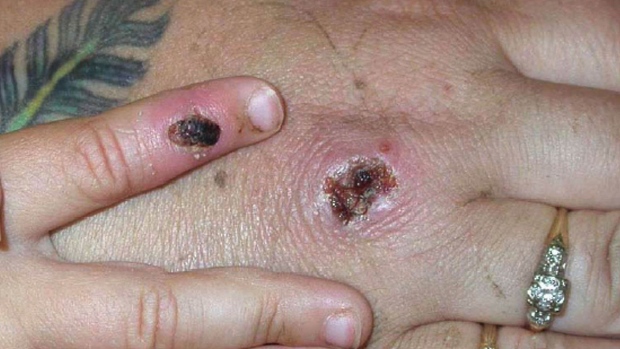 UNDATED ? JUNE 5: In this Centers for Disease Control and Prevention handout graphic, symptoms of one of the first known cases of the monkeypox virus are shown on a patient?s hand June 5, 2003. The CDC said the viral disease monkeypox, thought to be spread by prairie dogs, has been detected in the Americas for the first time with about 20 cases reported in Wisconsin, Illinois, and Indiana. (Photo Courtesy of CDC/Getty Images) Photographer: Getty Images/Getty Images North America , Photographer: Getty Images/Getty Images North America

(Bloomberg) -- Denmark has registered its first case of monkeypox in a male traveling from Spain, health authorities said.

The patient has been interviewed by doctors and has been placed in isolation, according to a statement on Monday. Authorities have started to identify and contact close contacts in order to halt further contamination.