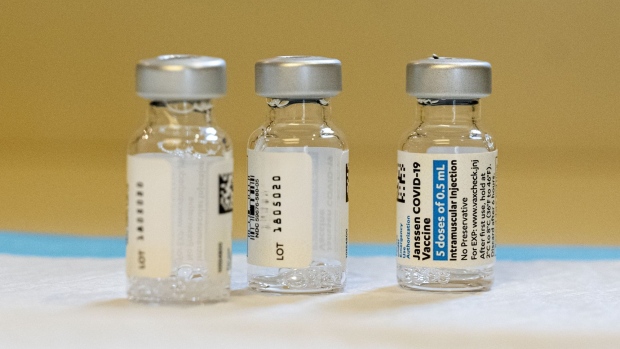 Vials of the Johnson & Johnson Janssen Covid-19 vaccine at San Rafael Commons in San Rafael, California, U.S., on Thursday, March 25, 2021. Health departments across the U.S. have deployed mobile units to eliminate challenges like waking up early to schedule appointments, navigating online portals and standing in line, all of which can deter the elderly, disabled or immune-compromised. Photographer: David Paul Morris/Bloomberg , Bloomberg

(Bloomberg) -- Denmark won’t use Johnson & Johnson’s Covid-19 vaccine in its immunization program, after health authorities in the country judged the risk of blood clots unacceptable, according to local media including broadcaster TV2.

The decision comes less than a month after Denmark became the first European Union member to drop AstraZeneca Plc for similar reasons.

Denmark had pre-ordered about 7 million vaccine shots from J&J, more than from any other producer. The decision to drop the company from its inoculation program means the Danish government is unlikely to reach its target of immunizing the country’s adult population by early August.