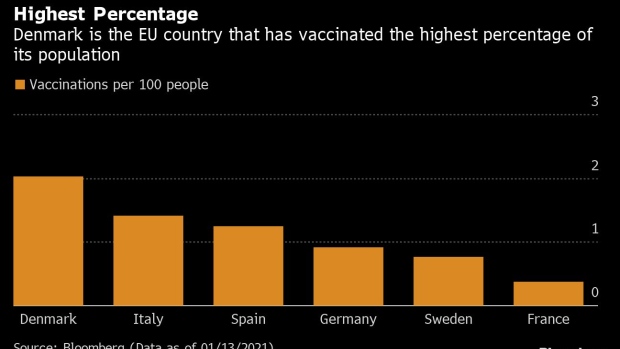 (Bloomberg) -- Denmark leads the way in Covid-19 inoculations in the European Union, having already given 2% of its population the shot.

Health authorities expect all priority groups -- health-care workers and the elderly -- to be vaccinated by April, and to offer shots to the rest of the population soon thereafter.

“We have achieved a very fast and efficient rollout of the vaccinations,” the head of the Danish Health Authority, Soren Brostrom, said in a statement. He pointed out that vaccines were administered in all of the country’s elderly care centers within a couple of weeks of the initial rollout.

While it’s still early days for the biggest vaccination campaign in history, here are four reasons Denmark is well positioned to succeed in its efforts:

Local politicians like to point out that Denmark is a society based on trust when explaining why Danes are willing to pay one of the highest rates of income tax in the world. That also applies to science. A recent study by the Carlsberg Foundation found that 79% of Danes were willing to receive the coronavirus vaccine. That compared with 54% in Italy and 50% in Sweden.

“The Danish population strongly supports the vaccination effort, and its trust in health authorities and willingness to be vaccinated are actually one of the highest in Europe,” Brostrom said. “It has given us a good starting point for the rollout.”

The Nordic region is one of the most digitally-advanced in the world. Danes use very little cash and are used to communicating with authorities via the internet or mobile phone applications. A personal identification number, known as CPR, links every resident to a centralized national register, while an electronic mail app facilitates communication between authorities and citizens. A centralized database helps health officials map out vaccination priorities.

“Our knowledge of the population based on the CPR-number system is top notch, so it’s easy to identify who belongs in which category,” Allan Randrup Thomsen, a virology professor at the University of Copenhagen, told Bloomberg.

An efficient digital infrastructure helps keep the population informed, but still requires clear communication. Prime Minister Mette Frederiksen and her government were quick to shut down the economy during the initial stages of the pandemic and have stuck to consistent messaging about the dangers of the virus ever since. Unlike elsewhere, such as in the U.K., the government has rarely been accused of falling behind the curve.

Thomsen says “authorities have been very clear in their communications.” And “when there is a well-thought plan, people are more willing to place their trust in the system,” he said.

Like the rest of the Nordic countries, Denmark’s welfare state is considered one of the best in the world, with health care and education all the way through university free for all. But unlike neighboring Sweden or Finland, where the vaccination program relies on local health authorities, Denmark has centralized the process. This means doses are distributed efficiently and vaccination numbers are reported faster than elsewhere in the region.

“We have a really good and well-functioning collaboration with the regions, the municipalities and the general practitioners on the practical planning of the vaccinations,” Brostrom said. All agencies, including the police and the armed forces, have also been closely involved, “so everyone knows what the plans are and how to implement them,” he added.