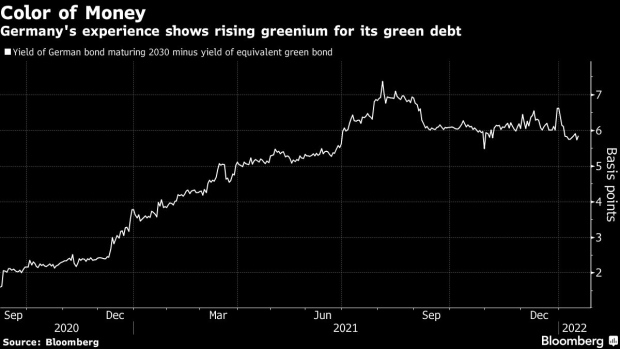 (Bloomberg) -- Denmark’s debut in the green bond market made a hot start after a surge in bids led it to slash its borrowing costs versus conventional debt, with one pension-fund investor seeing this “greenium” rising further this year.

Denmark saw a premium of five basis points as it sold $760 million of its inaugural 10-year green debt via auction, after getting bids for almost five times that volume. The greenium for the AAA-rated nation was at the top end of forecasts and twice the level seen by the U.K. in its debut last year, which HSBC Holdings Plc had dubbed the biggest ever for a high-grade sovereign issuer.

The high level of greenium shows the market’s expecting the bonds to become even more valuable when the central bank sells further rounds later this year, said Poul Kobberup, chief investment officer at Danica Pension, which was among the funds participating in the auction.

“If you don’t have a strong expectation that it will become even more expensive, it is at least difficult to spot a market argument to buy at minus 5,” Kobberup said by phone.

Denmark has mirrored the new 10-year green note to a conventional bond with the same maturity, following Germany’s twinning model, which makes it easier to compare the two. It also provides an option to freely switch away from the green bond to hedge against the risk of lower liquidity.

Kobberup said the coming weeks will show whether its buyers are primarily long-term or short-term. That matters because “as a rule you’d hope it will have ended up with buyers who are not so busy having to go out and flip things very quickly.”

Either way, the auction’s success is a signal to politicians that funding for green investments is available, he said. The Nordic country is a relative latecomer to a green debt market that exploded last year, introducing it to help fund one of the world’s most ambitious climate targets.

“This is a clear signal to the finance ministry that they should start launching green initiatives,” said Sydbank A/S’s Chief Economist Soren Kristensen in a note to clients. “Investors will happily provide the funding, even if it will cost a bit on returns.”