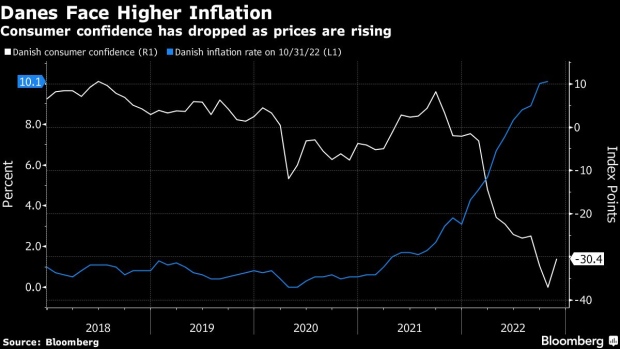 Rooftops and spires sit on the skyline of Copenhagen as the Oresund Bridge connects Denmark to Sweden as seen from the Rundetaarn (Round Tower) in Copenhagen, Denmark, on Thursday, Jan. 3, 2019. For the first time in almost three years, the central bank of Denmark has bought kroner to support its euro peg through a direct intervention in the currency market. Photographer: Bloomberg/Bloomberg , Photographer: Bloomberg/Bloomberg

(Bloomberg) -- Denmark’s lenders face rising credit losses as homeowners are forced to tackle a toxic combination of higher costs for both their loans and for consumer goods as well as falling property prices, the country’s central bank said.

Banks must plan for the losses and make sure they have adequate capital buffers and liquidity, Nationalbanken said on Thursday in its biannual stress test and financial stability report.

Denmark exited the pandemic with its economy in a better shape than most peers and growth has so far continued, buoyed by a strong labor market. Still, the inflation rate is above 10% and consumer confidence has dropped to the lowest levels since the 1970s, indicating a recession next year in line with a number of European peers.

The stress tests showed that some large credit institutions would be close to breaching their capital requirements “in a severe recession,” the central bank said. Meanwhile, the country’s middle-sized banks may face the most immediate credit losses as they are the most exposed to small businesses at risk of bankruptcy.

“Obtaining liquidity via the market has become more expensive, and customer demand for liquidity and loans may change rapidly in the present situation,” Peter E. Storgaard, head of financial stability, said in the statement. “The banks must be prepared for this.”