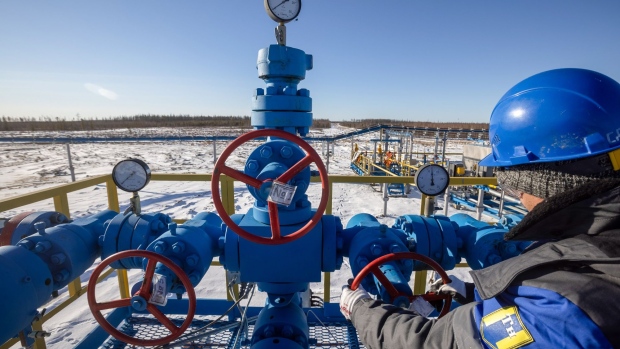 A worker turns a valve wheel at a gas well on the Gazprom PJSC Chayandinskoye oil, gas and condensate field, a resource base for the Power of Siberia gas pipeline, in the Lensk district of the Sakha Republic, Russia, on Tuesday, Oct. 12, 2021. European natural gas futures declined after Russia signaled that it may offer additional volumes soon. , Bloomberg

(Bloomberg) -- Denmark could be the next country cut off from Russian natural gas as its biggest utility is refusing to cave in and make payments in rubles.

Orsted A/S is preparing for Gazprom PJSC to cut off one of Denmark’s biggest sources of the fuel, the firm said in a statement on Monday, adding that it expects it will be able to secure alternate sources of supply in the market. The payment deadline is Tuesday and the company will continue to pay in euros, it said.

“There is a risk that Gazprom Export will stop supplying gas to Orsted,” it said in an emailed statement.

The Nordic country would be the latest to have its Russian gas supplies severed after Finland, Poland and Bulgaria were all cut off recently. European nations are split over how to handle Moscow’s demand that all payments for the fuel should be made in the local currency, and utilities have responded to the challenge differently.

The Danish wind power giant has a long-term contract for 20 terawatt-hours per year with Gazprom that’s set to expire at the end of the decade. That’s about 1.3% of the gas the European Union imported from Russia last year and more than 80% of the 24 terawatt hours of natural gas that Denmark imported last year. Orsted said earlier this year that it planned to buy far less than the maximum allowed by the contract.

Denmark also relies on domestic production, but that’s lower than normal right now as the Tyra field is closed for renovation.

Orsted said Feb. 27 that it would stop buying Russian coal and biomass for its power stations. Chief Executive Officer Mads Nipper added though that the firm risked suffering major legal ramifications from terminating its contracts with Gazprom.