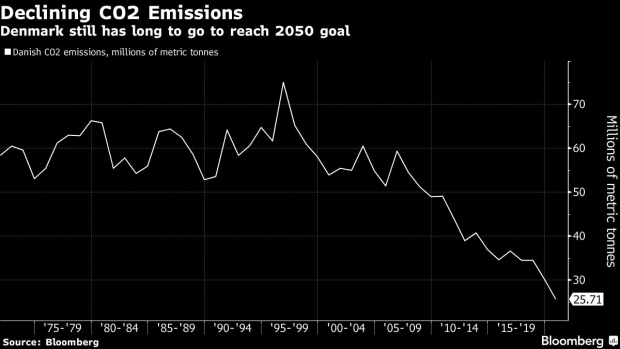 (Bloomberg) -- Denmark’s government wants to drop fossil fuels in domestic air travel by 2030 in its most recent push to meet its climate targets.

The Nordic country, which recently proposed to boost investments in the green hydrogen industry, wants the first domestic flights to use green fuel no later than in 2025, Prime Minister Mette Frederiksen said in her annual address on the new year’s first day.

“To travel is to live and therefore we fly,” Frederiksen said in a televised speech. “But at the same time, it damages our climate. We want to make flying green.”

It’s the most recent in a string of policies set to help the government meet one of the world’s most ambitious climate targets. By 2030, Denmark plans to reduce carbon emissions by 70% compared with 1990-levels. In her speech, Frederiksen also pledged a more streamlined tax on emissions for businesses to ensure that the highest emitters pay the highest taxes.