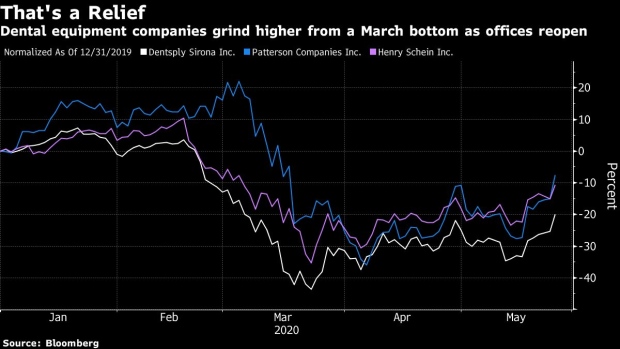 Adental hygiene student at the New York City College of Technology (NYCCT), right, and adjunct professor look over a patient's x-ray at the NYCCT training facility in the Brooklyn borough of New York, U.S. , Bloomberg

(Bloomberg) -- The latest findings from the American Dental Association show a clear rebound in the number of reopened dental offices, shining a light at the end of the tunnel for an industry that just last month was at a “virtual standstill.”

Roughly 65% of U.S. practices were open for patients in the week ended May 18, more than double what was seen two weeks earlier, according to the findings from an ADA survey. Almost 40% of respondents said their total patient volume for the week was more than half of normal compared to 15% the week of May 4. The rebound in both open offices and the increasing number of patients should surprise investors, Evercore ISI analyst Elizabeth Anderson wrote.

Shutdowns from statewide stay-at-home orders caused a plunge in spending for dentists as they shuttered their offices except for emergencies. That battered companies that make and sell equipment to dental professionals, such as Henry Schein Inc., Patterson Companies Inc., and Dentsply Sirona Inc., and orthodontists, like Align Technology Inc.

The ADA findings are better than feared and help to limit the potential downside for the equipment providers, Anderson wrote in a note, raising her revenue estimates and upgrading shares of Dentsply Sirona to outperform from in line. While she admits that “forecasting the impact of pandemics is an inexact science (to say the least),” the survey data are trending better than her initial expectations.

“We continue to believe that second-quarter dental results will [be] ugly across the board,” Anderson wrote, “but the current situation has improved vs a few weeks ago.” She pointed to large surveys that showed consumers are getting more comfortable with a return to their dentist compared to some other activities, which points to further volume improvements.

The ADA survey showed a correlation between dental practices that were open and states that had relaxed their restrictions the most, with 62% of responders whose offices are closed citing statewide lockdowns among their reasons.

UBS analyst Kevin Caliendo wrote that at the start of this week only a handful of states, including New York and California, remained closed to elective procedures. Caliendo said dental volumes will lag more traditional health care during the recovery because of the elective nature of dental care.

More than half (53%) of respondents in the ADA survey whose practices are closed said their office lacks an adequate supply of personal protective equipment (PPE), something that has been a concern for many over the past month.

The ADA survey showed most dentists faced a greater shortage of N95 masks and gowns, but have larger supplies of both surgical and face masks. A check of dental supply seller The Dentists Supply Company’s TDSC.com showed many offerings had limits in the amount of products a customer could buy, and warnings that the availability and delivery of products weren’t guaranteed.