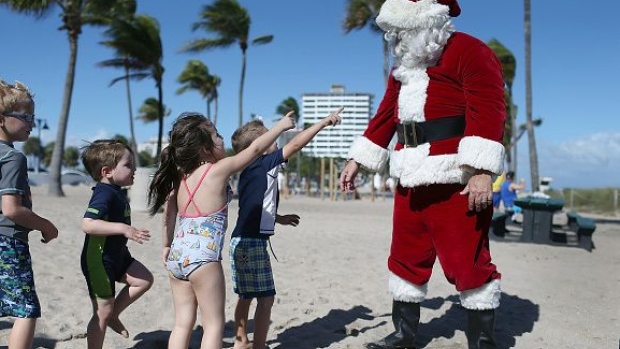 So much for Santa in person. , Photographer: Joe Raedle/Getty Images North America

(Bloomberg Opinion) -- When my uncle died in March after a long illness, his family said they’d hold a memorial service once everyone could get together again. The service will be this Saturday. I won’t be there and, more important, neither will my mother, his big sister. The 600-mile trip is too dangerous for her to make.

On the other side of the family, my cousin was planning a party in October to celebrate my aunt’s 90th birthday. She’s now postponing it until her 95th.

Public policy and political proclamations rightly focus on the medical and economic aspects of Covid-19 — its material effects. But the pandemic has also exacted a psychological, social and spiritual toll.

People have buried loved ones without funerals, canceled anniversary trips and missed the births of their grandchildren. They’ve postponed weddings and proposed over Skype. They’ve called off family reunions and missed Easter mass. Instead of Seders for 20, they’ve settled for Zoom.

Between now and the end of the year, things will only get worse. Devoid of the anticipation of reuniting with friends, back-to-school shopping is no longer a ritual of optimism and fresh starts — with kids and parents alike dreading the prospect of more homebound lessons.

The Jewish high holidays will bring neither big family dinners nor packed houses of worship. “We're planning our ‘congregation’s’ High Holy Day ceremonies to be on Zoom with prerecorded music,” writes retired linguistics professor Geoffrey Nathan in a Facebook thread. Not a hopeful way to start the new year.

Neither are those that mark the holiday season stretching from Thanksgiving to New Year’s.

Last year, more than 55 million Americans traveled at least 50 miles for Thanksgiving. The most traditional Thanksgiving songs are “We Gather Together” and “Over the River and Through the Woods.” It is a holiday celebrated by coming together. Its meaning depends on gathering around a festive table.

When Walmart and Target recently announced they’d keep stores closed on Thanksgiving, they weren’t signaling a more meaningful, less materialistic holiday season. They were anticipating the exact opposite: a lonely fall and winter, devoid of the rituals and gatherings that give the season its emotional resonance.

Black Friday is more than a retailing bonanza or consumerist frenzy. It’s a celebration. For many Americans, it’s a way to get into the seasonal mood -- to go out in public with friends and family and anticipate Christmas.

Covid-19’s medical and economic impact is notoriously uneven. Its psychological toll is less so.

Even if you’re a healthy, highly paid online worker with a big house, a surging financial portfolio and no homeschooling duties, you can’t host a big dinner to celebrate Rosh Hashanah, visit your extended family for Thanksgiving, or attend a Lessons and Carols service on Christmas Eve or a performance of Handel’s “Messiah.” All that singing is dangerous.

No matter how insulated you are from the medical and economic effects of the pandemic, you feel its social repercussions.

One result of holiday social distancing may actually be more gift-giving. Even without the excuse of a holiday, spontaneous online purchases have already become a way to show quarantined love. “I’m buying gifts all the time,” says a New York friend who lavishes specialty foods from Goldbelly on her grown kids near and far.

Along with food, masks are popular pandemic gifts, as are books and toys to keep house-bound kids entertained. I recently ordered jigsaw puzzles from the Los Angeles County Museum of Art’s shop for my art-loving mother who, like many homebound souls, has picked up the puzzle habit.

Like museums, libraries are closed, making their staffs as depressed as their patrons. To cheer up librarian friends around the country, Lesley Zavediuk, a librarian in Greensboro, North Carolina, has been sending them Cats Vs. Pickles plush toys, which she first spotted in a Facebook ad. “They were funny, cute, cheap,” she said, “and I thought they would make my friends happy since everything is terrible all the time.”

With social gatherings, workplaces, sports, cultural activities and worship services shut down, the activities that give healthy lives meaning can be hard to find. Healthy or not, you can’t even camp out in the Walmart parking lot hoping to snag a Black Friday bargain!

Sometimes it seems as if the only officially sanctioned meaningful activity is politics. Hold a protest and you can see your friends. Last week Nancy Rommelmann, a Portland, Oregon, journalist, reported on how protesting there has become a form of nightlife, with “a new festiveness, marching bands, t-shirt kiosks, and, beamed onto the side of the courthouse, a high-tech light show with the names of people murdered by police, as well as piggy-faced cops with x-ed out eyes.”

If you don’t want to leave the house, you can always get in political fights on social media. That doesn’t bode well for the next few months. Happy holidays.

Virginia Postrel is a Bloomberg Opinion columnist. She was the editor of Reason magazine and a columnist for the Wall Street Journal, the Atlantic, the New York Times and Forbes. Her next book, "The Fabric of Civilization: How Textiles Made the World," will be published in November.