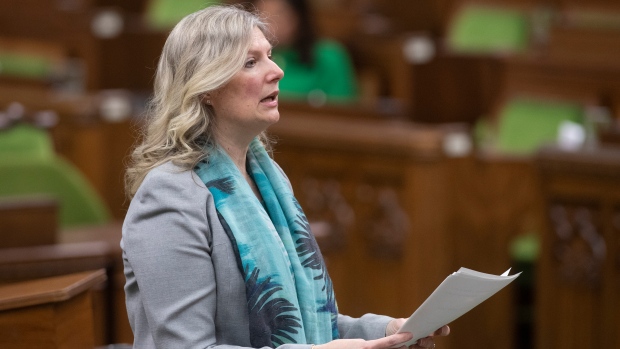 Conservative MP Leona Alleslev rises to pay tribute to the victims of the shooting in Nova Scotia following Question Period in the House of Commons Monday April 20, 2020 in Ottawa. The Canadian Press/Adrian Wyld

OTTAWA -- Toronto-area MP Leona Alleslev has resigned as deputy leader of the Conservative party in the waning weeks of its leadership contest.

Alleslev says she wants to engage more fully in the race as the selection of the Andrew Scheer's successor is too important for her to stand aside.

In her resignation letter, posted last night, she does not endorse any of the four candidates.

Alleslev was elected as a Liberal in 2015, crossed the floor to the Tories in 2018 and was appointed deputy leader of the Conservative party after the 2019 election.

In recent months, she has steered an internal caucus effort to draft conservative-minded policies that would help the country recover from the COVID-19 pandemic.

Voting is underway to select Scheer's replacement and a winner is expected to be announced in late August.