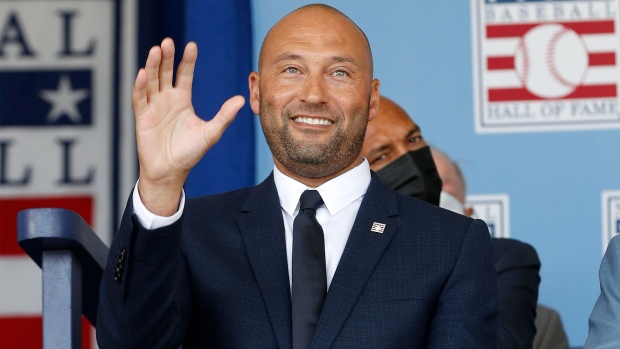 The $10 million round was led by M13 Ventures Management, with Defy.vc, Elysian Park Ventures, Lightspeed Ventures and BAM Ventures also participating. Arena Club’s total funding has climbed to about $20 million.

The company, which provides an online forum to display and grade sports cards, was started earlier this year by Jeter and Brian Lee, the former chief executive officer of Honest Co. Members can create virtual showrooms to buy, sell and trade their cards. Items are graded and kept at a central vault, with users receiving digital proof of ownership.

Management plans to spend the new capital to hire more staff and improve the website. They will also begin promoting the brand on the card-show circuit and online.

Interest in sports collectibles has spiked in recent years, with investors pumping cash into new ventures even as prices fluctuate. Lee said a recent lull in the market has sifted out many speculators looking to make a quick buck, but long-term collectors and hobbyists remain heavily involved.

“The true collectors are here to stay,” Lee said. “It leads to a much healthier industry and a healthier hobby.”

Arena Club is Jeter’s latest focus since hanging up his cleats in 2014. He has actively invested in companies ranging from video-conferencing to spirits, while selling a sports-media venture, the Players’ Tribune, in 2019. Trading cards didn’t start as a full-time hobby for him — he used to buy packs just for the gum, he said, but his interest grew over time.

“It was almost a secret society,” Jeter said of his experience with cards back in the Yankees locker room. “You'd have to whisper to someone like, oh, OK, you're a collector too? Now it's just become more mainstream.”

Jeter stepped down as CEO of the Miami Marlins and sold his stake in the franchise earlier this year. He said he has no immediate plans to return to baseball and will likely rule out another run as a team owner altogether, though he’d like to be involved in the sport in some way.

The Hall of Fame shortstop said he’s slowed down a lot since leaving baseball, getting pedicures with his kids and picking them up from school. He said he started thinking about life after baseball long before retirement.

“You have a long life to live afterwards,” Jeter said. “More and more today, athletes are understanding it.”

--With assistance from Jason Kelly.