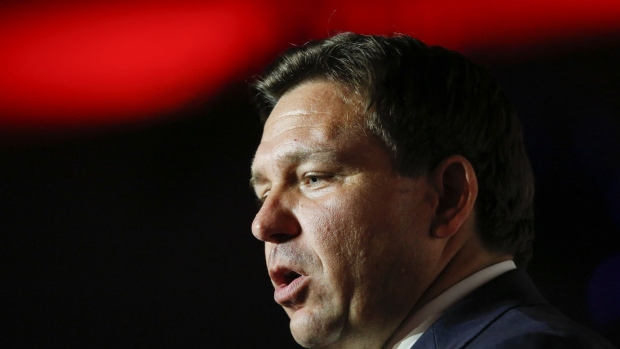 Flanked by members of the new Office of Election Crimes and Security, DeSantis said the ex-felons -- all convicted of murder or sex offenses -- would now be charged with voter fraud, a third-degree felony punishable by up to five years in prison and a $5,000 fine.

In 2018, Florida voters overwhelmingly voted to restore voting rights to felons -- except those convicted of murder and sex offenses. The Republican-led legislature later dramatically undercut the ballot measure by requiring they repay outstanding fines and fees.

The announcement, made in the Democratic stronghold of Broward County, came five days before a competitive Democratic primary between former Governor Charlie Crist and Agriculture Commissioner Nikki Fried to face DeSantis in November. DeSantis does not have a primary challenger.

DeSantis said the arrests are an example of voter fraud cases that would “fall through the cracks” before his elections police force -- which reports directly to him -- began operation in July. He promised more arrests of people who voted in more than one jurisdiction or were not US citizens.

“This is the opening salvo,” he said.

Standing at a rostrum that said “election integrity,” Secretary of State Cord Byrd, a DeSantis appointee who has declined to say that Joe Biden won the 2020 presidential election, pointed to a Democratic primary last year in Broward County in which Representative Sheila Cherfilus-McCormick won by five votes after a recount.

“I’m certain that in that tranche of voters there were plenty of illegal ballots cast,” he said, without providing any evidence.

“It was a giant nothingburger,” he said. “It seemed to me that he was looking for an excuse to justify his new election police force and do it in an area where a lot of voters from the opposition party live.”

Brad Ashwell, state director of the voting rights advocacy group All Voting is Local, said the news conference could intimidate some former felons who are eligible to vote.

“The timing is incredibly suspect,” he said.

Michael Bloomberg, the founder and majority owner of Bloomberg LP, the parent company of Bloomberg News, raised about $16 million with a Democratic-associated nonprofit to pay the outstanding costs owed by felons in the state, a requirement before they could vote under the ballot initiative.