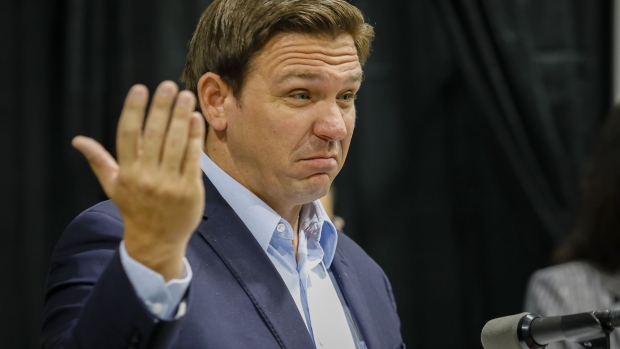 Ron DeSantis, governor of Florida, speaks during a news conference at a Regeneron monoclonal antibody clinic in Pembroke Pines, Florida, U.S., on Wednesday, Aug. 18, 2021. Floridas State Board of Education said it would force defiant school districts to comply with Governor DeSantiss executive order forbidding them from mandating students wear masks as a way to slow a surge in Covid-19 cases. Photographer: Bloomberg/Bloomberg , Photographer: Bloomberg/Bloomberg

(Bloomberg) -- Florida Governor Ron DeSantis said he doesn’t recall a speaker at one of his events on Monday falsely telling a crowd that the Covid-19 vaccine “changes your RNA.”

Darris Friend, a Gainesville employee who rejects his city’s vaccine rules, was a featured speaker at the rally in Newberry, Florida, organized by DeSantis to criticize mandates. Friend delivered the remarks behind a podium with the official state seal, directly next to DeSantis. The governor watched Friend as he spoke, but after the conspiracy-theory comment DeSantis made no effort to correct it.

“Honestly, I don’t even remember him saying that, so it’s not anything I’ve said,” DeSantis said Tuesday in Doral, when asked about the episode by a reporter. “I think the data is very clear on the vaccinations: you’re much less likely to be hospitalized or die if you’re vaccinated.”

Anti-vaccination conspiracy theorists have falsely claimed that mRNA vaccines change DNA. The same groups have sometimes swapped out RNA in a new variation of the same misinformation.

While some of the Covid vaccines contain messenger RNA that instruct the body’s own cells to temporarily produce the coronavirus’ spike protein, they do not change the normal production of messenger RNA inside the body. The mRNA vaccines don’t get inside the nucleus of cells, where DNA is stored and messenger RNA is produced.

DeSantis has pushed back against the notion that he hasn’t done enough to promote vaccinations. His administration frequently points to the more than 50 vaccine-related appearances he has made, primarily early this year. At recent events, DeSantis has loudly and forcefully rejected mandates and so-called vaccine passports.

Monday’s event may have been the furthest he has flirted with the anti-vaccination crowd, a significant bloc in the Republican Party that he’d presumably need if he runs for president in 2024.