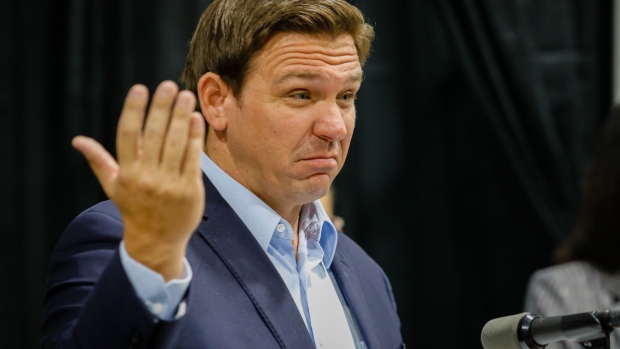 Ron DeSantis, governor of Florida, speaks during a news conference at a Regeneron monoclonal antibody clinic in Pembroke Pines, Florida, U.S., on Wednesday, Aug. 18, 2021. Florida’s State Board of Education said it would force defiant school districts to comply with Governor DeSantis’s executive order forbidding them from mandating students wear masks as a way to slow a surge in Covid-19 cases. , Bloomberg

(Bloomberg) -- Florida Governor Ron DeSantis on Tuesday backed a statewide plan to deal with rising seas, but promised that the millions of spending wouldn’t go for “any left-wing stuff.”

DeSantis, whose state is intensely vulnerable, used the occasion to drive home that he doesn’t like the term “global warming,” even though the scientifically proven phenomenon threatens the cities that are the centers of Florida’s population and economy.

The plan, announced in Oldsmar, near Tampa, would spend more than $270 million on flood mitigation. It comes after the governor signed a $640 million “climate resilience” plan this year, but experts say adaptation could be many orders of magnitude more expensive.

At the event, DeSantis’s Secretary of Environmental Protection, Shawn Hamilton, called the Sunshine State “ground zero for the impacts of sea-level rise.”

DeSantis himself -- seen as a potential Republican candidate for president in 2024 -- was circumspect in discussing the root causes of the threat: carbon released into the atmosphere by automobile and industry. Petrochemical and coal companies have been heavy donors to his party.

“What we’re doing though is just reacting to the fact that OK, we’re a flood-prone state,” DeSantis said. “We do have storms.”