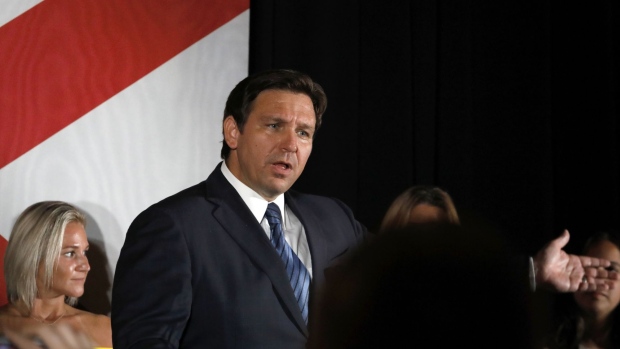 Ron DeSantis, governor of Florida, speaks during a 'Keep Florida Free' rally in Hialeah, Florida, US, on Tuesday, Aug. 23, 2022. DeSantis, running unopposed in Tuesdays primary as he goes for a second term, has amassed $142 million from the start of 2021 through August 5 this year from donors including the hedge fund billionaires Ken Griffin and Paul Tudor Jones. , Bloomberg

(Bloomberg) -- Florida Governor Ron DeSantis was sued by a state lawmaker for allegedly wasting hundreds of thousands of dollars in state funds to fly dozens of Venezuelan migrants to Martha’s Vineyard, Massachusetts, in what critics have called a political stunt that tricked vulnerable immigrants.

Florida state Senator Jason Pizzo, a Democrat from Miami, said in the lawsuit that the Republican governor’s controversial flights violated the state constitution by spending taxpayers’ money on unapproved expenditures. Pizzo also asked the court to stop DeSantis from transporting any more migrants to other states.

“As a citizen and taxpayer of the State of Florida, plaintiff Jason Pizzo challenges the expenditure of funds appropriated by the Legislature to transport aliens from San Antonio, Texas, into Florida and then to Martha’s Vineyard, Massachusetts,” Pizzo’s lawyer Mark Herron said in the complaint, filed Thursday in state court in Tallahassee.

Pizzo alleges DeStantis violated a 2022 appropriations act that earmarked $12 million in coronavirus funds for “the transport of unauthorized aliens from this state consistent with federal law.” The state senator claims the flight to Martha’s Vineyard didn’t comply with the details of the appropriation law because, among other things, the state’s transportation department didn’t develop a program for such flights.

DeSantis Communications Director Taryn Fenske said in a statement that Pizzo “never misses an opportunity for his 15 minutes of fame and is challenging an action on an appropriation he voted for.” The governor has repeatedly defended the flight and said it successfully raised awareness of the immigration problem in the US.

The suit also names as defendants Florida Chief Financial Officer Jimmy Patronis and Jared W. Perdue, the head of the Department of Transportation.

“The critics have no immigration policy because Biden’s agenda is to perpetuate illegal immigrants entering our country, at the expense of the law-abiding, tax-paying communities where they end up,” Patronis said. “Biden has done nothing. I applaud Governor DeSantis for stepping up to the plate.”

DeSantis, a potential 2024 presidential candidate, was previously sued over the flights by a group of migrants who claimed they were duped into making the trip with vouchers for free fast food and promises of employment and housing.

In that case, a federal judge in Massachusetts ruled this week the migrants can proceed with their lawsuit against DeSantis under pseudonyms. Their lawyer had argued that his Venezuelan clients feared “unusually severe harm if their identities are revealed” because the matter is “politically fraught” in US.