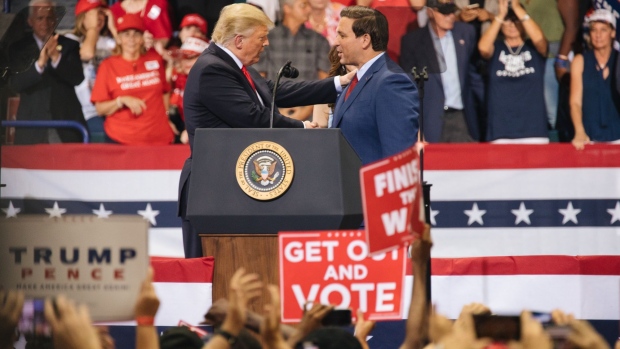 Ron DeSantis, governor of Florida, center, speaks during a U.S. President Donald Trump 'Homecoming' rally in Sunrise, Florida, U.S., on Tuesday, Nov. 26, 2019. Trump is preparing to pour hundreds of millions of dollars into Florida for his 2020 campaign after changes in demographics and voting laws put the linchpin swing state up for grabs. Photographer: Jayme Gershen/Bloomberg , Bloomberg

The conservative student group affiliate Turning Point Action said it is holding “Unite and Win” rallies featuring DeSantis in Arizona, New Mexico, Ohio and Pennsylvania, including for GOP US Senate nominees Blake Masters in Arizona on Aug. 14 and JD Vance in Ohio on Aug. 19 in races that will help determine party control of the upper chamber. Masters and Vance are among Republicans backed by Trump.

“Gov. DeSantis has the unique ability to unite conservatives around these candidates,” Charlie Kirk, founder and president of Turning Point Action, said in a release.

DeSantis is running for re-election for a second term in Florida but has been making fundraising trips and campaigning for candidates in other states, fueling speculation of a potential 2024 White House bid. He’s been cast as an alternative to Trump, who has also teased a third White House run.

A spokeswoman for DeSantis didn’t immediately respond to a message seeking comment.

The Florida governor was the clear second choice for the GOP nomination behind Trump in the Conservative Political Action Conference’s 2024 presidential straw poll in Texas this past weekend. DeSantis was the overwhelming choice if Trump doesn’t run.