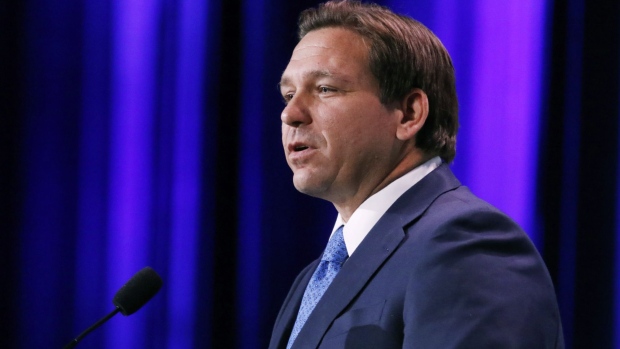 (Bloomberg) -- Florida Governor Ron DeSantis, who’s described his sweeping mandate as a ‘blueprint’ to follow elsewhere, plans to discuss his political plans with donors in Miami as his landslide reelection stokes speculation of a presidential run against Donald Trump in 2024.

DeSantis and his wife Casey will meet with donors from South Florida at the event on Sunday, called “The Freedom Blueprint,” to thank them for their support and to discuss plans for a second term, according to people familiar with the matter who asked not to be named because details of the event aren’t public. Representatives for the governor didn’t reply to requests for comments on the meeting.

DeSantis, 44, had record fundraising in this election cycle, exceeding $160 million since January 2021. His sweeping win in November helped propel him as an alternative to Trump, especially as some Republican megadonors, including billionaires Stephen Schwarzman and Thomas Peterffy, say it’s time for the party to move on to a new generation of politicians.

DeSantis has repeatedly described his victory as a “bright spot” for Republicans in last month’s elections and a “blueprint” that could counter lackluster GOP performance in the rest of the country. Even as Trump has openly criticized him — nicknaming him “Ron DeSanctimonious” — DeSantis has avoided direct confrontation, instead telling people to “check the scoreboard” from the midterms, a jab at the poor showings of the former president’s handpicked candidates.

DeSantis has no plans to not ask for donations at the event or anywhere else in the near future, in part because he’s still got tens of millions left in campaign coffers, two people familiar with fund-raising plans said. The Florida GOP is focusing on raising funds to pay for DeSantis’s inauguration in January, including naming co-chairs who’ve committed to raise or give at least $1 million each, the two people said.

The governor is considering similar events in other parts of the state to thank local donors, mirroring what he did after his 2018 election to his first term, two people familiar with the matter said.

The Sunday event, which was first reported Wednesday by the Washington Post, will be limited to people who gave to DeSantis’s campaign from South Florida, the people said.

(Updates throughout with details of event and fundraising plans.)