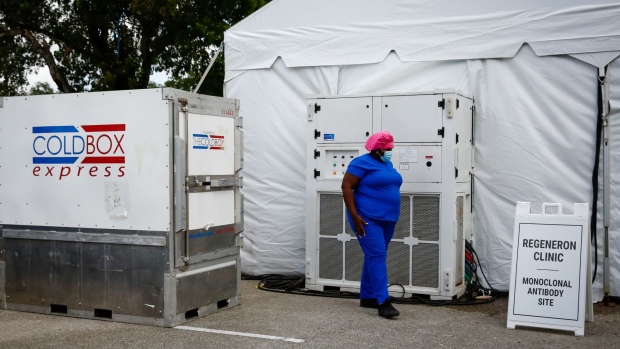 A coldbox containing monoclonal antibody treatments at a Regeneron clinic in Pembroke Pines, Florida, U.S., on Wednesday, Aug. 18, 2021. Florida’s State Board of Education said it would force defiant school districts to comply with Governor Ron DeSantis’s executive order forbidding them from mandating students wear masks as a way to slow a surge in Covid-19 cases. , Bloomberg

(Bloomberg) -- Florida Governor Ron DeSantis is calling on regulators to allow use of two monoclonal antibody therapies for Covid-19 after the Food and Drug Administration halted their use in a ruling neither manufacturer disputes.

The FDA said Monday that it was rescinding authorization for the use of Eli Lilly & Co. and Regeneron Pharmaceuticals Inc. monoclonal antibody treatments in the U.S. because they aren’t effective against omicron, which has become overwhelmingly dominant in all regions of the country, including Florida.

The decision, backed by the American Medical Association, comes as other therapies are increasingly available while one other monoclonal remains in use. Several studies have indicated the other two treatments don’t work against omicron in particular. Eli Lilly went so far as to say it agrees with the FDA, while Regeneron acknowledged the decision and said it’s working on other, newer monoclonal antibody treatments.

DeSantis, however, said access to those drugs shouldn’t be barred “based on the whims of a floundering president” -- though the decision was made by the regulator, not by President Joe Biden’s staff.

The developments mark the latest chapter in a long-running spat between DeSantis and the White House. DeSantis, who is often floated as a likely GOP presidential contender, has coddled entrenched vaccine hesitancy and anti-mask sentiment in his party, refusing to disclose his booster status and attacking vaccine and mask mandates.

DeSantis has aggressively promoted the monoclonal treatments through state-run sites, especially over the summer months when the Sunshine State was getting hit hard by the delta wave.

Speaking at a school Tuesday in Crawfordville, Florida, DeSantis cited the “very popular monoclonal antibody treatments that the state of Florida really pioneered over the summer.” He said those seeking the treatment in Florida were overwhelmingly vaccinated. Responding to a question from a reporter, DeSantis said it was possible Florida could take legal action to bring the treatments back. “We’re going to look,” he said. “We’re going to see what you can do.”

Prominent Republicans have regularly pushed for increased therapeutics instead of moving to mandate vaccine or mask requirements.

In its latest guidance, issued before the FDA ruling, the National Institutes of Health says that omicron is “predicted to have markedly reduced susceptibility” to the antibody cocktails from Regeneron and Lilly, and that only GlaxoSmithKline Plc’s cocktail exhibits activity against the variant, citing laboratory studies.

The FDA cited “the most recent information and data available” in its decision, which it said “avoids exposing patients to side effects” from treatments “that are not expected to provide benefit to patients who have been infected with or exposed to the omicron variant.” It noted that the treatments could be used again in the future if they’re effective against new variants that become dominant.

“That’s the reason why the FDA made that decision -- since these two monoclonal antibodies don’t work against omicron -- that it would not be a good idea to administer to anyone because all you’ll have is the risk of a potential adverse effect, with essentially no benefit from the actual therapeutic effect,” Anthony Fauci, head of the National Institute of Allergy and Infectious Diseases and a Biden medical adviser, told MSNBC on Tuesday.

Following the FDA’s decision, the Biden administration halted distribution of the two treatments to states. It had been shipping about 100,000 treatment courses, combined, each week as of late, and this week will ship none. It will continue to ship another monoclonal antibody, sotrovimab from GlaxoSmithKline and Vir Biotechnology Inc., which is believed to work against omicron.

Deliveries of Covid-19 treatment pills also began last month, a new therapy that officials believe can substantially curb severe or fatal cases. Supplies of one such pill in particular, Pfizer Inc.’s Paxlovid, remain limited but are forecast to increase in the coming months.

From June through mid-August, Florida was the biggest overall consumer of the treatments by a significant margin, and more broadly, monoclonals proved to be much more popular in Republican strongholds, even after adjusting for Covid-19 prevalence. That’s since changed somewhat.

DeSantis’s zeal for scooping up the treatments appeared to be behind the federal government’s move in September to institute a new distribution protocol based on the amounts of cases and hospitalizations in each jurisdiction. At the time, DeSantis criticized that move as an effort to retaliate against him.

In a statement late Monday, DeSantis’s press office said the state had canceled monoclonal appointments for Tuesday for more than 2,000 Floridians as a result of the FDA’s action.