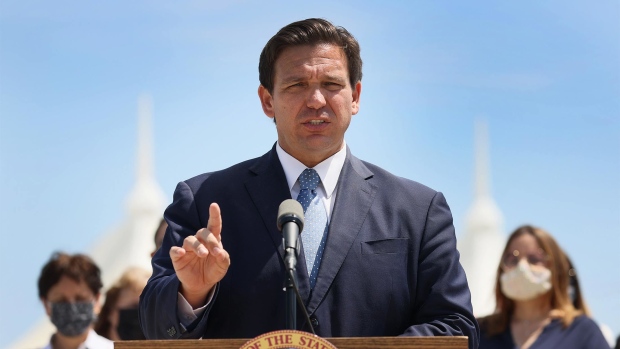 (Bloomberg) -- Florida Governor Ron DeSantis had a heated exchange with the White House on Wednesday amid a surge of coronavirus hospitalizations and deaths in his state that’s prompted a political clash over mask mandates and vaccine requirements.

DeSantis bristled at President Joe Biden’s declaration on Tuesday that he and other Republican governors who have sought to block schools and workplaces from requiring masks “get out of the way” as the federal government, educators and employers seek to respond to rising case levels resulting from the emergence of the more contagious delta variant.

“Let me tell you this: If you’re coming after the rights of parents in Florida, I’m standing in your way,” DeSantis said at a news conference Wednesday. “I’m not going to let you get away with it.”

The Florida governor added that he did not “want to hear a blip about Covid” from Biden until he secured the U.S. border with Mexico, where large numbers of migrants have sought to cross into the country. DeSantis is regarded as a top contender for the Republican presidential nomination in 2024, according to surveys of GOP voters.

DeSantis’s outburst was answered by White House Press Secretary Jen Psaki, who tweeted that the administration remained hopeful the governor would assist their efforts to combat the virus. She told reporters in her daily briefing on Wednesday that the administration has sought to deploy a team of officials to Florida to help with the surge in cases.

DeSantis was praised in the early months of the coronavirus pandemic by former President Donald Trump and other influential conservative figures for being among the first to end shutdowns and mask mandates. DeSantis frequently bragged that his decision had helped bolster Florida’s economy without resulting in a disproportionate increase in coronavirus infections.

Conditions in the state have deteriorated in recent weeks, however. The Florida Hospital Association said that there were 12,041 Covid-19 patients hospitalized in the state as of Wednesday -- well above Florida’s previous peak in July of last year.

“Current hospitalizations and the growth rate continue to be extremely troubling,” Mary Mayhew, the president of the association, said in a statement Tuesday.