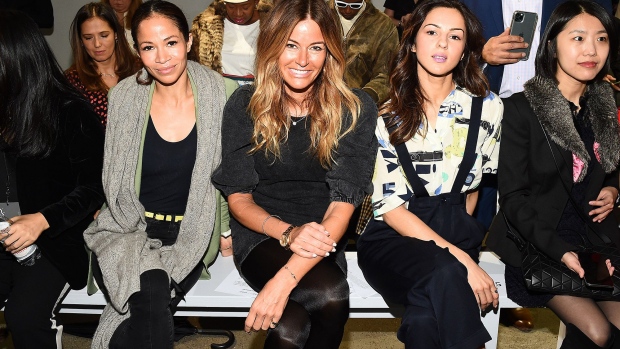 It wasn’t how Wang Tao’s latest collection was supposed to get to New York Fashion Week. But the designer considers it lucky they arrived at all.

“It’s like a Hollywood movie,” Wang, 52, said in the New York showroom where she had unfolded, ironed and sorted dozens of silk dresses and cashmere coats for the runway.

Coronavirus has created a global public health emergency that has taken lives and wreaked havoc in major and minor ways. This is the story of the professional obstacle the virus presented to one Chinese designer, and how she got around it.

Wang started her made-to-measure Taoray Wang label five years ago, designing for “the empowered career woman.” One customer she points to is Ida Liu, head of private banking in North America for Citigroup Inc.

“I am a huge fan,” Liu said in an email. “She has impeccable tailoring and work-appropriate styles with a twist.”

With prices ranging from about $500 for a blouse to $3,800 for a coat, she sells to a global clientele, including in Washington, where Tiffany Trump wore a white Taoray Wang suit to her father’s inauguration.

Wang traces her tailoring skills to her job as a menswear designer for Junko Koshino. Eventually she moved to England from Tokyo, then returned to her native Shanghai to work with broadcast.bo, a women’s brand that’s part of Ribo Fashion Group, which also owns Taoray Wang.

About a month before her show, Wang had designed and made about 95% of the collection she planned to show in New York. She assumed she’d fly to Shanghai to make final adjustments, once her team had returned from the lunar New Year holiday.

But as the coronavirus crisis escalated, she realized her plan was impossible. The holiday was extended. Logistics companies were shut down. Chinese were not allowed to leave the country.

“At first I thought it was not that serious, then I was terrified,” she said of the virus.

She turned to email. First, she had to identify people with U.S. passports who were already making the trip out of China, and would be willing to take the clothes. Second, she needed someone in the office to pack them.

A message to her staff explaining the predicament produced a fortunate response: A member of her design staff -- Bonan Tian -- had stayed in the company dormitory for the entire holiday and was already on the premises.

In a matter of hours, he stuffed the suitcases -- six instead of the 14 Wang would have used -- and got them delivered to an Chinese-American couple with U.S. citizenship flying to JFK airport.

The suitcases arrived in New York on Feb. 3 -- the cue it was all clear to send out the invitations. Wang arrived from her home in England two days later.

And on Feb. 11, the show went on. Actresses Annet Mahendru (“The Americans”) and Sherri Saum (“Locke & Key”) were watching from the front row as models paraded in her feminine, edgy power suits.

Wang called the show “Cafe a l’hiver,” inspired by a Paris morning watching women on their way to work “looking romantic and sexy, their hair moving, their silk dresses moving.”

The color palette reflects that scene, with blues, grays and pinks of dawn, and creams and browns of her cappuccino and croissant.

Even before the virus disrupted production in Shanghai, Wang was planning to have any orders produced in the city that inspired the collection, aided by a new business relationship: She has started designing clothes for Paris-based shoe brand Charles Jourdan.

But no matter where they are made or worn, she vows not to skip her signature -- silk linings with a traditional Chinese design of black-billed magpies on red plum branches.

“These birds,” she said, holding open her cashmere coat, “are legendary bringers of good fortune.”

To contact the reporter on this story: Amanda Gordon in New York at agordon01@bloomberg.net